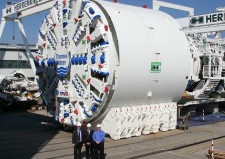 The Herrenknecht TBM that will be used by the Morgan Sindall/VINCI Construction Grands Projets/Bachy Soletanche (MVB) JV to bore the 6.4km long Lee sewer tunnel under east London has been switched on for the first time during a handing-over ceremony in Germany.

This is the first and last time the machine will be seen in its entirety before it is taken apart to be reassembled 80m below London.

The US$1bn tunnel, the UK’s deepest ever, will prevent 16 million tonnes of sewage entering the River Lee each year – a result of London’s Victorian sewers not being big enough to cope with heavy rainfall.

A team of Thames Water tunnelling experts will rigorously inspect every aspect of the machine over the next two weeks at Herrenknecht’s Schwanau factory to ensure it is up to the major engineering challenge ahead, before it is transported to the UK.

Lawrence Gosden, Thames Water’s head of capital delivery, said, “This machine is the best of its kind in the world. Tunnelling is a risky business, especially on a project of this scale, so it’s essential we use the best available technology and ensure every last detail meets our unique requirements.

“We face the challenge of boring the deepest tunnel in London at some of the highest groundwater pressures that a machine of this type has tunnelled in. We will be passing through four miles (6.4km) of the most abrasive ground, without any other shafts along the way.

“The Lee Tunnel is the first of two tunnels, which will collectively capture an average of 39 million tonnes a year of sewage from the 35 most polluting combined sewer overflows. The Lee Tunnel will tackle discharges from London’s largest overflow at Abbey Mills in Stratford, which accounts for 40 per cent of the total discharge. That’s why we’re dealing with this, the worst one, first.”

From mid-June, the tunnelling machine will be transported to London, where it will be reassembled in sections at Beckton sewage treatment works, before it is lowered into the ground. The machine will be transported by barge via Germany’s River Rhine to Rotterdam then shipped across the North Sea to Tilbury, on the Thames estuary in Essex, before being driven overnight in bits by lorry to Beckton.

The largest piece of the machine is the 7m diameter cutterhead, which will be transported in four parts.

A ‘slurry closed faced’ TBM is being used to tunnel the route beneath Newham. It will blend 1,000 tonnes of excavated chalk with water, forming a white slurry for processing above ground.

Tunnelling work on the Lee Tunnel is due to begin in January 2012 and is expected to finish in late 2013.  The machine is likely to progress at a rate of 17m a day.

In addition to the Lee Tunnel and proposed Thames Tunnel, Thames Water is also upgrading London’s five major sewage works so they can treat more waste, preventing them becoming overloaded in rainfall, and improving the quality to which sewage is treated, to further improve river water quality.