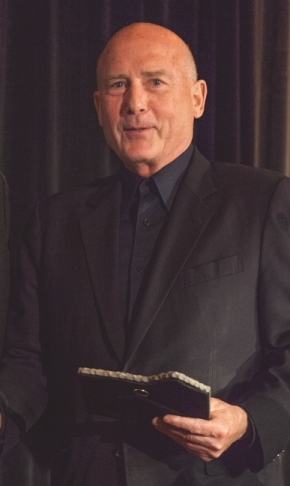 Every year, the Underground Construction Association (UCA) of SME honors an “Outstanding Individual” at its annual awards banquet, held in conjunction with the North American Tunnel (NAT) Conference. The distinctive award is given to a person who has made major contributions to the tunneling industry throughout their career. As David Klug, President of David R. Klug & Associates and past UCA of SME chair, said in his presentation of the award: “We nominated this person not only for his work in the industry as a manufacturer, but also for his work to promote the industry as a whole.”

“This person” was none other than Lok Home, President of The Robbins Company and longtime supporter of the UCA of SME. Home began his extensive tunneling career over 45 years ago, after graduating with a degree in mining technology from the Haileybury School of Mines in Ontario, Canada. After working for several years in Canadian mines, he joined Robbins as a Field Service Manager. Home later founded Boretec, Inc. which acquired Robbins, and unified the two companies under the Robbins name.

Home was nominated in large part because of his work to promote the industry by bringing the ITA-AITES World Tunnel Congress (WTC) 2016 to the United States. The event will be held in San Francisco, California in collaboration with NAT, marking 20 years since the last WTC conference was held in the U.S. The bidding process to bring the WTC to San Francisco required an extensive time commitment and industry knowledge. “We needed someone who understood the international community, and was well-respected throughout the world, to manage the bid. Lok offered services from his company and staff to prepare the bid, and we won [at WTC 2014] in Geneva,” said Klug.

Home’s industry involvement is widespread, and spans many organizations, one of which is ITAtech. ITAtech is an international group of manufacturers working together to develop universal standards and best practices within the industry. Home’s work with ITAtech includes the development of criteria for L10 Main Bearing life, and currently, segment backfilling standards. Standards for usage of drill and blast versus TBM methods in tunnels are an upcoming topic to be explored. The group hopes with these publications to provide a framework for the whole industry on a range of debated topics.

Upon receiving the prestigious award, Home attributed his success to the people he works with. “When it comes down to it, success comes from your team,” he said. “Build a good team around you and you build a success story.”