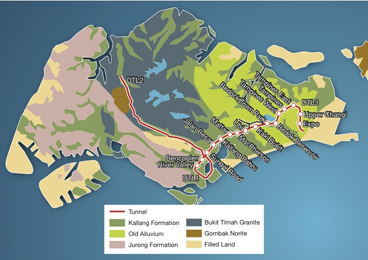 Contracts 925 and 937 are for the construction of Tampines East and River Valley stations and their associated tunnels and have been awarded to GS Engineering & Construction Corp. at US$174M and US$212.5M respectively.

The Tampines East station, which is also a Civil Defence shelter, will serve HDB residents in the vicinity and students at Tampines Junior College and Ngee Ann Secondary School. The River Valley station will serve hotels in the River Valley area and recreational establishments along the Singapore River, such as the Clarke Quay Festival Village. When completed, the station will be a gateway to the Fort Canning Park, providing Singaporeans easy access to the facilities in the park.

Contracts 925A for the construction of Tampines station has been awarded to KTC Civil Engineering & Construction Pte Ltd at a contract sum of US$98.7M.

The Tampines station will be an interchange station with the existing East West Line Tampines station. Located next to the Tampines bus interchange, it will create a new transport hub in Tampines and provide commuters an alternative choice to meet their daily travel needs. It will serve commuters going to the office buildings and commercial buildings at the town centre, such as CPF Tampines Building, Tampines One and Tampines Mall. The station will also double up as a Civil Defence shelter. KTC Civil Engineering & Construction Pte Ltd specialises in earthworks, deep excavation and infrastructure works. It was also involved in earthworks for the earlier Downtown Line contracts and the Marina Coastal Expressway.

Construction of these stations and tunnels will start this month and are targeted to complete in 2017.

The DTL3 is the final stretch of the 42km Downtown Line and will be construted using 29 EPBMs. It will enhance rail connectivity in the eastern corridors to the Central Business District (CBD) and developments in the Marina Bay area. Fully underground, DTL3 comprises 16 stations, including three interchange stations: MacPherson, Tampines and Expo. These interchange stations will link to the Circle Line (CCL) and the East West Line (EWL), providing greater accessibility and significantly improve travel time for commuters.