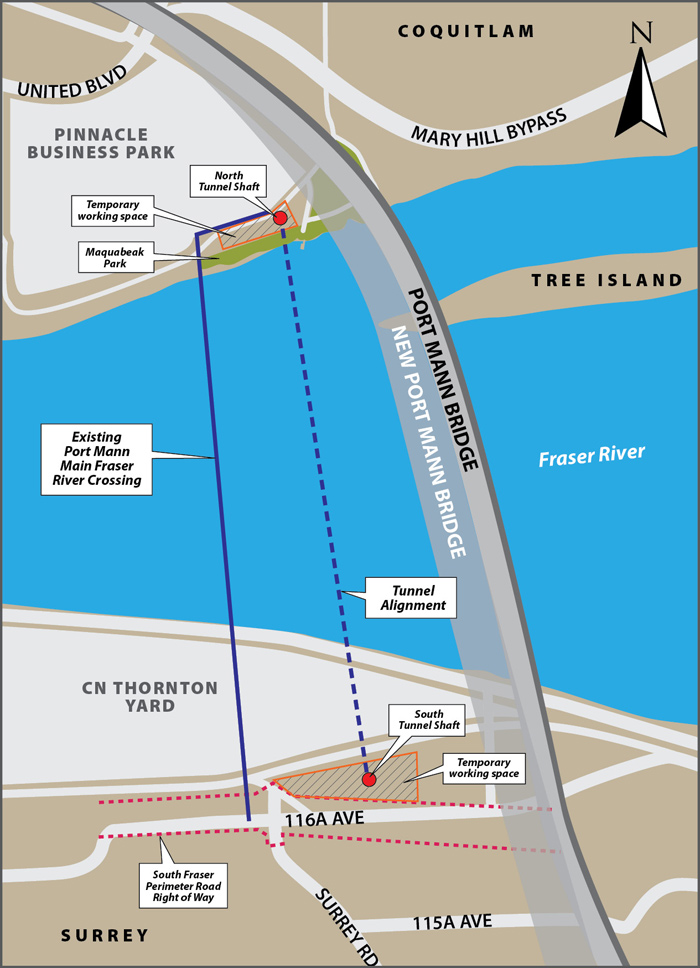 In mid-March, a joint venture of McNally International and Aecon Constructors was officially awarded the contract for Metro Vancouver’s highly challenging Port Mann Tunnel Project at a price of CA$167.3 million. The 1000m (3,280ft) long, 2.8m (9.2ft) inside diameter tunnel will be excavated under the Fraser River at pressures of up to 6 bar using a new EPB machine.

Designed by the Fraser River Tunnel Group – a joint venture consisting of Sandwell Engineering, Jacobs Associates and Golder Associates – the gasketed pre-cast segmentally lined tunnel will run from North Surrey to Coquitlam through glacial tills and clay deposits at an average depth of 60m (195ft), and 40m below water level under the Fraser River, will ultimately feature a 2.13m (7ft) inside diameter welded steel final liner. Provision for hyperbaric TBM interventions at 6 bar pressure – a first for British Columbia – will be required for the crossing.

The project also includes construction of two 50m-60m (165ft-195ft) deep shafts at either end of the tunnel. Following site mobilization in mid-April, shaft construction will begin at the end of May and will involve the installation of un-reinforced slurry walls as primary ground support. The shafts will then be excavated and lined with a 1m-1.5m (3ft-5ft) thick heavily reinforced concrete final lining prior to tunnel excavation.

The shafts will be a particularly challenging element of the project as the design requires 83m (270ft) deep un-reinforced slurry wall panels to be installed through till with artesian pressure. Tunnel excavation is currently scheduled to begin in August-September of 2012 and overall completion of the project due in May 2014. Hatch Mott MacDonald is acting as the owner’s project manager.

The Port Mann Tunnel is being built as part of Metro Vancouver’s CA$600 million potable water system upgrade that will double supply capacity to areas south of the Fraser River ensuring un-interrupted supply in the event of an earthquake.

Around the same time the Port Mann contract was announced, McNally International also became the first North American tunnel and marine contractor to achieve ISO certification for Quality Management Systems, Environmental Management and OHSAS for Health & Safety Management Systems. “The industry needs to move in this direction in North America,” says Pat McNally, President, whose father in 1949 started the company on which McNally International is founded. “For many large projects, ISO registration is becoming a requirement. And it should be. But in North America there simply aren’t many construction companies who have invested the time to go through the registration process.”

“We started out to achieve ISO Quality Management 90001,” says Laura McNally, Vice President of Corporate Development, a third-generation McNally employee. “But then we looked at what mattered to McNally and it was clear it was more than just growth, as a company we valued the safety and well-being of our employees and the environment we live in. So we expanded our scope to include the Health & Safety and Environmental Management systems too.”

“It just made sense,” says Pat McNally. “I like to think that we’ve formalized and documented what’s been working at McNally, improved upon it and shared it with everyone in the company.”