All four of the $11bn Melbourne Metro Tunnel’s 7.28m diameter Herrenknecht Mixshield TBMs are now boring the project’s 9km long twin tunnels across Melbourne, with the launch of TBM Meg from the Arden site in North Melbourne. 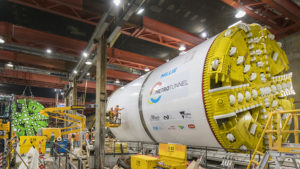 It’s a big milestone for the Metro Tunnel project, being constructed by the Cross Yarra Partnership (CYP) consortium. CYP, comprising Lendlease Engineering, John Holland, Bouygues Construction and Capella Capital, where work is continuing at all sites in accordance with strict safety measures through the coronavirus pandemic.

TBMs Joan and Meg were the first to launch, in 2019, and completed the 1.2km stretch of twin tunnels from Arden to the western tunnel entrance in Kensington earlier this year.

Pieces from the TBMs were returned to Arden Station by truck with the rest of the TBMs pulled back through the tunnels and reassembled.

TBM Joan was relaunched in May from Arden towards the site of Parkville Station and TBM Meg, after all essential checks were completed, was relaunched last week.

TBM Millie was launched in April and is digging the first tunnel between Anzac Station and the Metro Tunnel’s eastern entrance at South Yarra. TBM Alice was launched in May to begin creating the parallel tunnel.

This is in addition to the significant progress made across the entire project. At Parkville Station, excavation of the station box Grattan Street is now complete, while at State Library Station 50 steel columns are being installed.

The Metro Tunnel is on track to be completed by 2025 – a year ahead of schedule. It will allow more trains to run to the suburbs and reduce travel times by running the busy Cranbourne, Pakenham and Sunbury lines through a new tunnel under the CBD.

The Metro Tunnel will create a new end-to-end rail line from Sunbury in the west to Cranbourne/Pakenham in the south-east, with high capacity trains and five new underground stations.

Some of Melbourne’s busiest metropolitan train lines – Sunbury, Cranbourne and Pakenham – will run exclusively through the new tunnel. By taking these lines out of the City Loop, other lines will be able to run more services.

As a result, capacity will be created on the network to enable 504,000 more passengers to use the rail system during each peak period.

The Metro Tunnel is the first step towards a ‘metro style’ rail network for Melbourne with the ‘turn up and go’ train services that are the hallmark of the world’s great cities such as London, New York, Hong Kong and Singapore.

The Metro Tunnel Project is fully funded and was procured as a multi-billion dollar availability based Public Private Partnership (PPP) which includes the design and construction of the twin 9km tunnels and five underground stations, private finance and the provision of maintenance and other services during the operating term.