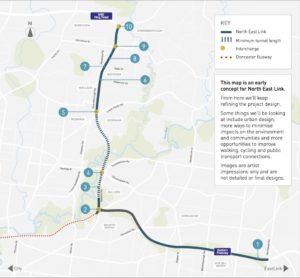 Construction for Victoria’s biggest infrastructure project is one step closer with three consortiums shortlisted to build Melbourne’s North East Link’s twin 6km long road tunnels, which will be the longest in Victoria.

The three bidders are competing for the $7-9bn major works contract as part of a Public Private Partnership to deliver this long-awaited infrastructure project.

The bidders include some of the biggest construction companies in Australia and globally.

Along with building the twin tunnels, the selected contractor will also design the entire project, including its new interchanges, freeway upgrades and paths for pedestrians and cyclists.
This major construction will start in late 2021, and early works to prepare for this begin early 2020 following planning approvals.

CPB Contractors will lead the early works package, which includes a range of power, water and other utility works to reduce disruption when major construction starts.

North East Link is expected to open to traffic in 2027.