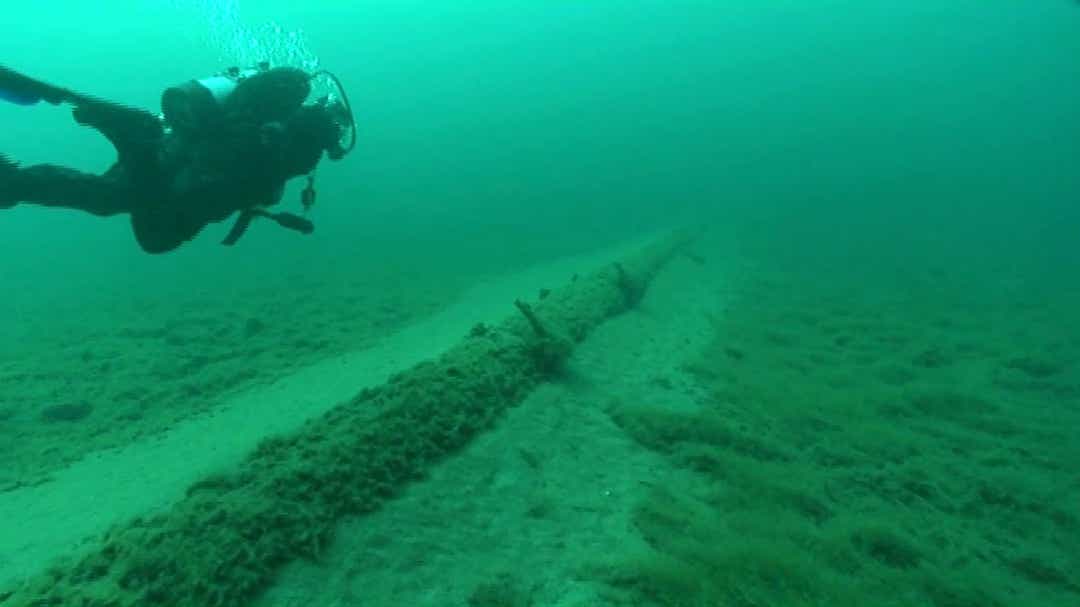 A diver working on behalf of the nonprofit National Wildlife Federation inspects the Line 5 oil pipelines at the lake bottom in the Straits of Mackinac during a July 2013 dive.

On Thursday, October 31, a state judge, handed Enbridge Energy a victory in its quest to build a 4-mile long tunnel to relocate the aging Line 5 oil and gas pipeline in the Straits of Mackinac, in the United States.

Michigan Court of Claims Judge Michael J. Kelly ruled that the Republican-led Legislature did not violate the Constitution when it enacted a 2018 law creating an authority to oversee and operate the tunnel.

The ruling sides with the Canadian oil giant in its request to uphold a series of agreements made last year with Republican Governor Rick Snyder to replace the Straits pipelines and bury new lines in a bedrock tunnel that is expected to cost Enbridge $500 million.

It overturns an opinion by Attorney General Dana Nessel – who is separately suing to shut down the pipeline – and is a setback for Democratic Governor Gretchen Whitmer, who has ordered state agencies to stop work on approvals and other actions related to the tunnel.

Nessel and Whitmer both said they will appeal the ruling.

“The state of Michigan will not rely on a foreign corporation to protect and preserve our state’s most precious resource, its Great Lakes,” Nessel said in reference to Enbridge, a Canadian oil giant.

In the same statement, Nessel accused Enbridge of misrepresenting its financial holdings when entering the tunnel deal with Snyder’s administration – an issue that concerns whether the company would cover the cost of a potential oil spill. Nessel released a 120-page report her office commissioned on the issue.

Enbridge sued the state earlier this year after Whitmer – Snyder’s successor – halted work on the tunnel plan in late March. Whitmer’s move came after Nessel, in a legal opinion, found the law creating a tunnel oversight board unconstitutional.

Both Nessel and Whitmer campaigned on shutting down the pipeline, and they opposed the deal with the Snyder administration that was finalized during his final days in office.

The pipeline transports up to 540,000 barrels of light crude oil and natural gas liquids per day from Superior, Wisconsin, to Sarnia, Ontario. That includes 547 miles across Michigan and 4.5 miles beneath the Straits, where it branches into two lines.

Enbridge calls the pipeline crucial to delivering fuel across the region and argues a shutdown would particularly harm the Upper Peninsula, which draws much of its propane from the line. Environmentalists and other concerned citizens fear that a rupture, however slight the possibility, would create a catastrophe in the Great Lakes. They argue tunnel construction would take too long and keep oil flowing through the Straits in perpetuity.

On Thursday, Kelly ruled on questions that don’t touch on the environmental debate. Essentially, the dispute asked whether lawmakers in 2018 knew what they were voting on in creating a board to oversee the tunnel. Yes, Kelly ruled, in the latest chapter of a complicated legal drama.

During his final weeks in office in December, Snyder signed Public Act 359 to create the Mackinac Straits Corridor Authority to oversee construction and operation of the tunnel. He immediately made appointments to the authority’s three-member board, which approved a series of tunnel related agreements with Enbridge.

The legislation’s passage, the board’s creation and its signed agreement with Enbridge came in a matter of days, leading to complaints from Democrats and environmentalists that language in the law and was poorly vetted, if lawmakers had any time to read it.

Initially, Snyder’s plan hinged on the Mackinac Bridge Authority, an independent state agency that oversees the iconic bridge, owning the 4-mile, 12-foot in diameter tunnel and leasing space to Enbridge for 99 years.

That prompted overwhelming opposition, prompting Republicans to reshape the law. But rather than scrapping the original bill, Republicans – to save time during the fast-moving lame duck session – re-wrote it, keeping the Mackinac Bridge Authority in the bill’s title as a body authorized to acquire the new “utility tunnel.”

The bill was written so that the Mackinac Bridge Authority would immediately transfer all of its initial powers over the tunnel – including acquisition construction and operation – to the newly created corridor authority board.

In doing so, Nessel argued the Legislature violated the “title-object” provision of the 1963 Michigan Constitution, which is meant to give lawmakers clear notice of what they’re voting on. And she argued courts would see the violation as too large to keep the corridor authority intact.

Kelly disagreed, calling the law’s contents “well known, as evidenced by the strong policy-based reactions the Act has drawn.”

“Regardless of whether the Court agrees with defendants about the lack of tidy draftsmanship, the argument advanced by defendants misses the mark,” Kelly wrote.

Enbridge has taken steps to keep its timeline for the tunnel intact – should the company resolve all the legal issues. That includes investigative borings into the Straits bedrock in July to collect rock samples.

The company obtained the state and federal permits for the geological work before its feud with the state escalated recently over tunnel plans. The company said it could finish the tunnel by 2024.

Enbridge applauded the ruling on Thursday. “We are reviewing the decision and may have further comment,” spokesman Ryan Duffy said in a statement. “Enbridge remains fully committed to the Great Lakes Tunnel project.”

In her vow to appeal, Nessel also accused Enbridge of misrepresenting its financial holdings when making the tunnel deal. The statement linked to an Oct. 29 report commissioned by her office that probes whether Enbridge would foot the bill for a clean-up were Line 5 to rupture.

In a 2018 deal with the Snyder administration, certain Enbridge business entities agreed to fund $1.878 billion in potential damages in an oil spill.

The new report from Wisconsin-based American Risk Management Resources found that parent company Enbridge Inc. could foot the bill. But Enbridge Inc. didn’t technically sign the agreement with the state – only its US subsidiaries did.

And “the U.S. based Signatories would not have enough resources to fund a loss event of this magnitude,” the report found – unless the parent Canadian company voluntarily bailed them out.

According to the report, Chris Johnston, Chief Financial Officer of Enbridge Energy Partners, L.P, told the Minnesota Public Utilities Commission in 2018 that Enbridge parent company isn’t obligated to honor assurances from its subsidiaries.

“In the event of a catastrophic oil spill, the people of the state of Michigan could be left holding the bag for more than a billion dollars in unfunded liability,” Nessel said of the report.

“We are tremendously disappointed that the Court of Claims allowed this lame duck law to stand and look forward to seeing the case go to the Michigan Supreme Court,” Sean Hammond, policy director for the Michigan Environmental Council, said in a statement. “Despite this ruling, we ask Gov. Whitmer and AG Nessel to continue to use every legal tool at their disposal to end the massive risk to our Great Lakes posed by Line 5 as soon as possible.”

“With this ruling, people will have peace of mind that they are not going to be left out in the cold this winter by political gamesmanship. We need these jobs. We need this tunnel. Let’s get it built,” he wrote.

Meanwhile, Nessel is suing to shut down the pipeline in a separate lawsuit.

Filed in Ingham County Circuit Court, the lawsuit calls the pipeline “a continuing threat of grave harm to critical public rights in the Great Lakes,” and seeks to void a 1953 easement that allows Enbridge to run the pipelines across state-controlled bottomlands in the Straits.

The filing calls for Line 5 to stop flowing “as soon as possible after a reasonable notice period” and to allow officials to permanently decommission the lines.

Enbridge officials say they could finish the tunnel by 2024.