MineARC Systems has won an order from Herrenknecht to supply custom-engineered Emergency Refuge Chambers for 11 of the 15 TBMs the German manufacturer is currently producing for Phase 1 of the Doha metro project, in Qatar. The chambers will provide immediate safe-haven for workers requiring shelter in the event of a fire, a fall of ground, or similar emergency.

Each of the 11 MineARC Refuge Chambers can shelter up to 20 people for a minimum of 30hrs and features a number of important life support systems, including; primary and secondary oxygen supplies and a carbon monoxide/carbon dioxide scrubbing system to regenerate the air. 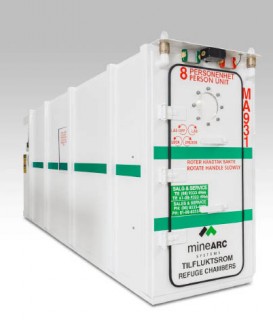 All of these vital safety features ensure the chambers meet the latest industry safety legislation pertaining to refuge chambers. This includes the current British Standards and the 2014 ITA Guidelines for the Provision of Refuge Chambers in Tunnels under Construction.

Future scope for the metro project includes the 17.5km underground section of the semicircular Blue Line that will link Airport City and West Bay Central and the extension of the Green Line, which are both yet to get under way.

For more information on tunnelling in Doha see: previous stories by www.tunnellingjournal.com