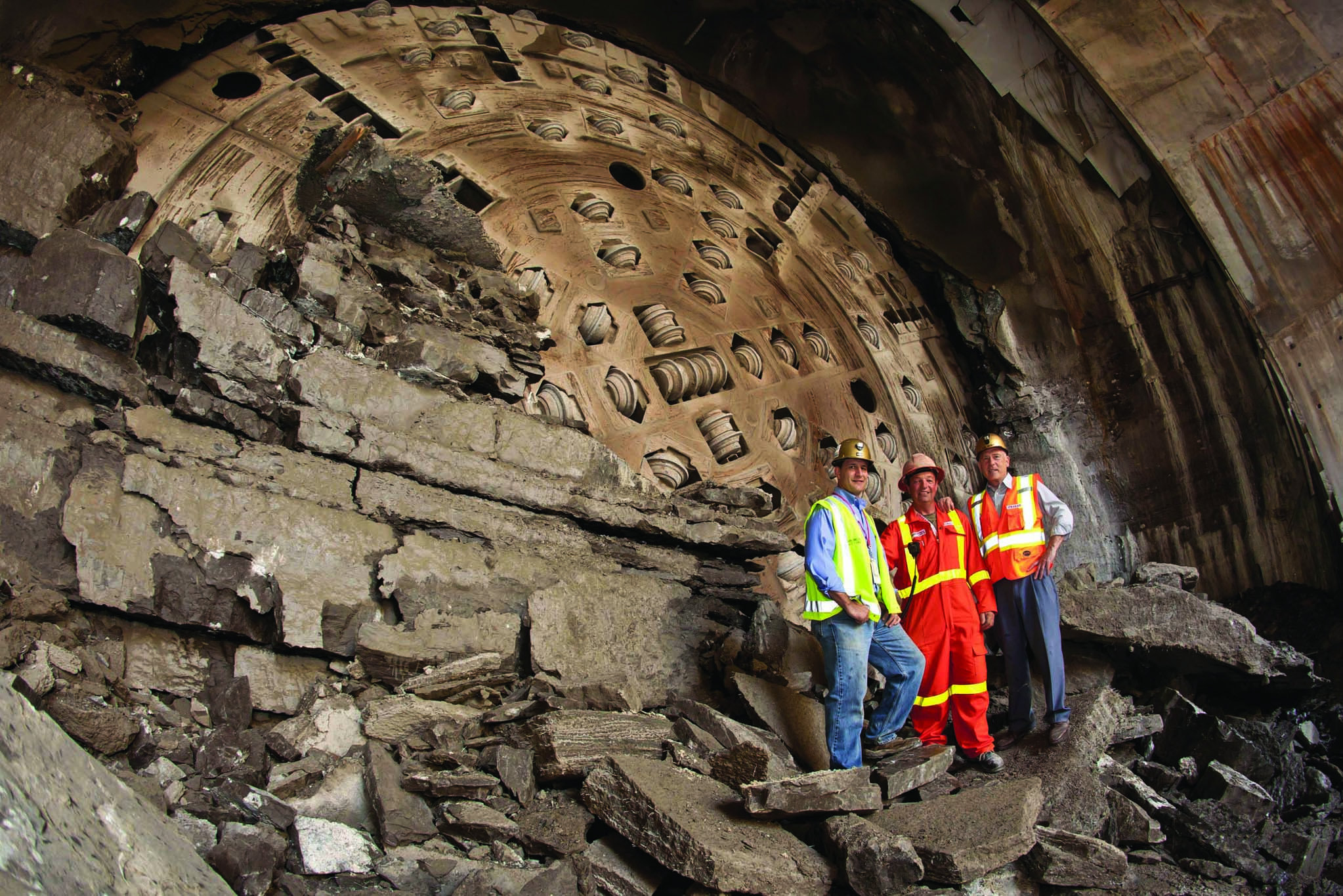 The first photos have been sent in from the May 13th completion of the world’s largest hard rock TBM drive at Canada’s 10.1km long Niagara Tunnel Project. A well-attended ceremony celebrated the final breakthrough of the 14.4m diameter Robbins Main Beam, following advance into a 300m long grout tunnel on March 1.

Ontario Premier Dalton McGuinty, as well as the CEOs of project owner Ontario Power Generation and contractor Strabag AG gave speeches in front of a diverse crowd including hundreds of local tunnel workers. The officials announced that as part of the historic breakthrough, the massive cutterhead would be retained and kept on display in the city of Niagara Falls, Ontario.

“We have a group of up to 500 people directly and indirectly involved with the project. Their determination, hard work, and willingness to work as one team while keeping focused to get the job done safely have all contributed to this project’s success,” said Ernst Gschnitzer, Strabag Project Manager.

The completion of the project comes after continuous highs and lows, from significant over-break to multiple world records. Challenging rock conditions in Queenston shale at the beginning of the TBM drive required the tunnel alignment to be raised by 45m into more stable rock. While in the difficult ground, crews undertook significant measures to safely scale down loose rock from the tunnel crown.  After surmounting these conditions, the Robbins machine managed to achieve two records for any TBM 11m in diameter or larger = 468m in one month, and 153m in one week, both in July 2009.

“There is a tremendous sense of accomplishment here.  There were huge logistical challenges just delivering and assembling the TBM onsite, and the machine has now overcome significant geologic challenges as well,” said Mike Kolenich, Robbins Manager of Projects for Niagara. 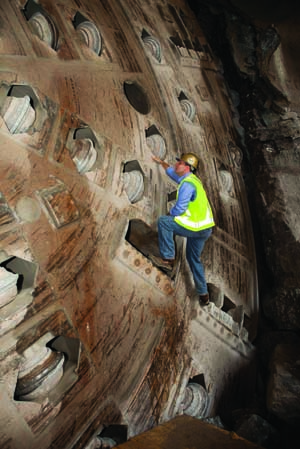 The Niagara Tunnel Project was initiated in June 2004 by provincially-owned company Ontario Power Generation. The Robbins machine was launched in summer 2006 less than 12 months from contract signing, following Onsite First Time Assembly (OFTA). The project marked the first use of OFTA.

While the tunnelling portion of the project has reached completion, two years of work still remain. Approximately 30% of the continuous concrete lining was completed during tunnelling, with about two thirds of the work still to be done. The finished 12.8m diameter tunnel will be fully lined with both 600mm thick cast in place concrete and a polyolefin waterproof membrane to prevent leakage. Other construction remaining includes the outlet structure, gates, and removal of the cofferdam in the Niagara River, as well as removal of the rock plug at the outlet end. .  The tunnel is planned to go into operation in 2013.