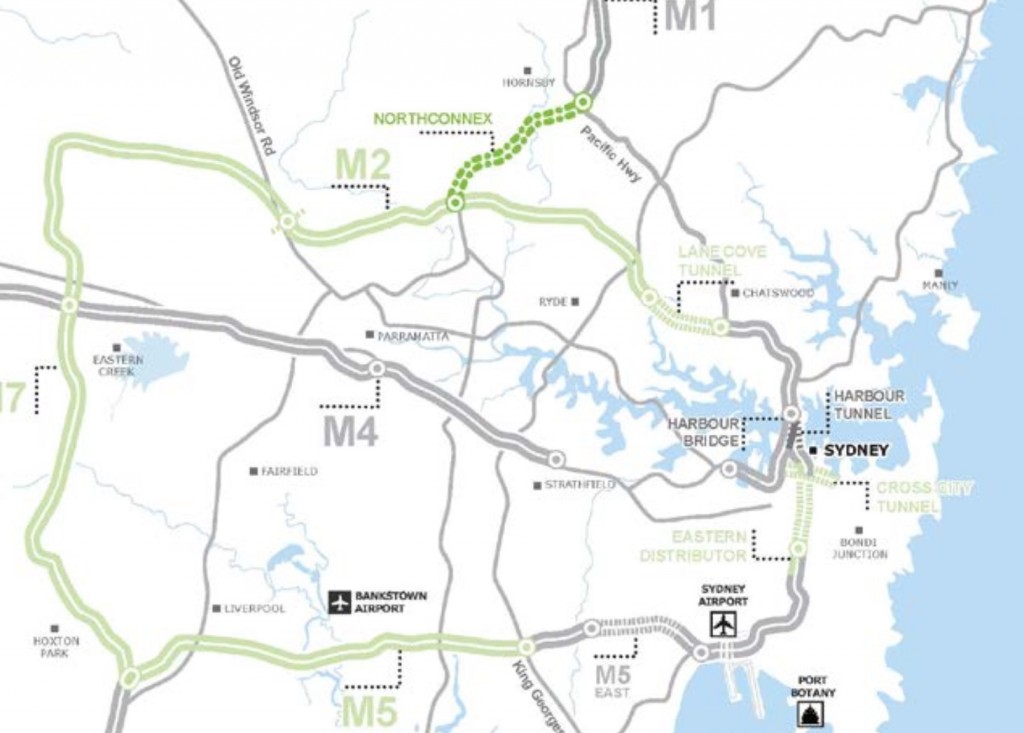 The contracts were signed on the weekend between the proponents Transurban and Westlink M7 shareholders and the NSW Government.

Mr Briggs said the signing marks the final milestone before the start of work later this month on the twin 9km tolled tunnels under Pennant Hills Road.

Total project cost of approximately $2.9 billion, which includes a fixed price Design and Construction contract to be delivered by a Lend Lease / Bouygues Construction joint venture, for the twin tunnels, together with development, planning, approvals, and financing costs

“The Australian and New South Governments are getting on with delivering world class infrastructure to grow the NSW economy and create thousands of new jobs,” Mr Briggs said.

“The project will deliver real benefits for Sydney by easing traffic congestion, particularly along Pennant Hills Road, enabling commuters and freight trucks to bypass up to 21 traffic lights and reduce travel time by up to 15 minutes.

“NorthConnex will also reduce the number of heavy vehicles travelling along Pennant Hills Road by more than 5000 trucks per day.

“It will also provide an alternative route to the Pacific Highway which has 40 sets of traffic lights,” Mr Briggs said.

“This is a great day for Sydney. The project has now cleared the final stage of the unsolicited bid process which began in 2012 and is the first major infrastructure in NSW to be approved under the unsolicited proposal process put in place by this government,” Mr Gay said.

“It follows planning approval granted by the NSW Planning Minister last month including unprecedented air quality safeguards for any road project in this state.

“This is about building for our city’s future. NorthConnex will deliver a missing link that will provide benefits for the whole motorway network, ensuring that as Sydney’s population keeps growing, the M2, Lane Cove Tunnel and M7 don’t grind to a halt.

“NorthConnex provides a continuous motorway-grade road from Newcastle and the Central Coast to Western Sydney and Canberra. It also means journeys between Sydney’s CBD and the regions north of Sydney are linked by motorway.

“This is a project that has been on the drawing board for far too long – it can’t come soon enough for motorists using Pennant Hills Road and the communities who live along it.

“I’m delighted through this process we’ve been able to deliver an outcome that demonstrates innovation, value for taxpayers and is environmentally responsible,” Mr Gay said.

The $3 billion project, consisting of a construction budget of $2.65 billion in addition to land and project delivery costs, will be funded through toll charges, a contribution from the NSW and Australian Governments of up to $405 million each and previously outlined concession extensions on the M2/Lane Cove Tunnel and M7 and truck toll changes on the Lane Cove Tunnel and M7.

As part of the project, there will also be a $105 million upgrade to the M2 including an additional 3.5 kilometre westbound lane from the merge point of the M2 and NorthConnex to Windsor Rd.

Under the unsolicited bid process a cross-agency committee worked to assess and develop the proposal including representatives of the Department of Premier and Cabinet, NSW Treasury, Transport for NSW, Infrastructure NSW and Roads and Maritime Services.