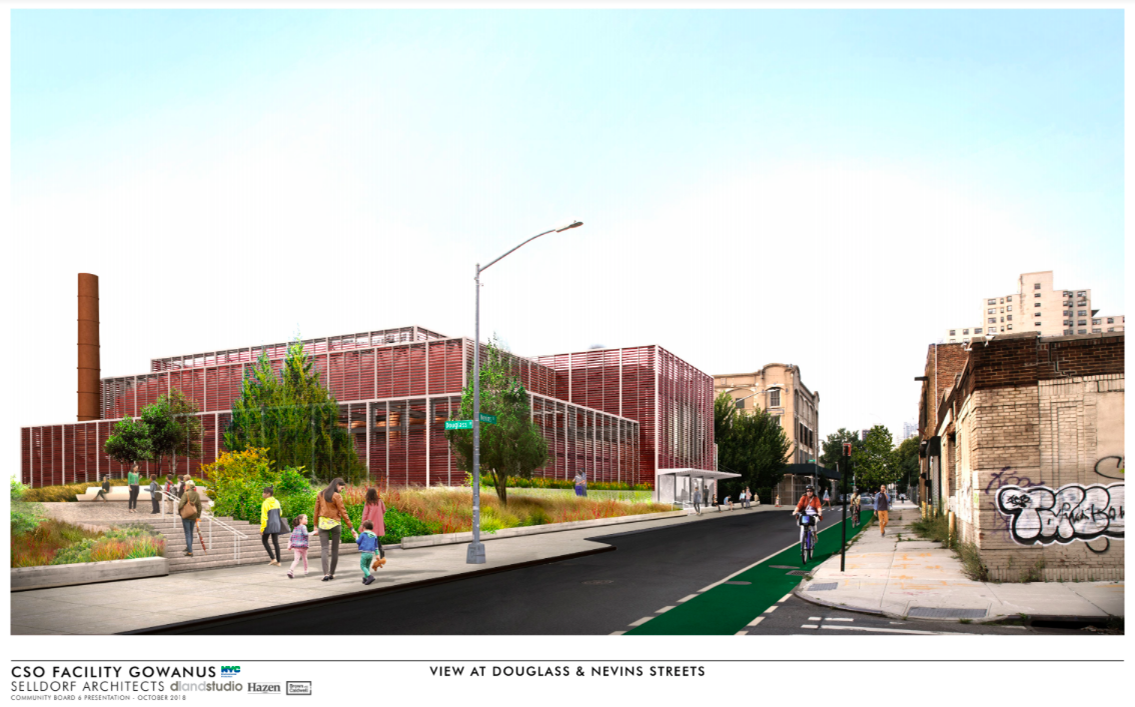 The NYC Department of Environmental Protection (DEP) has proposed the construction of a large-diameter tunnel running the length of the Gowanus Canal, in Brooklyn, to collect combined sewage overflows (CSOs) instead of two tanks currently planned under the EPA’s Superfund clean-up of the area.

Over the past several years, DEP engineers and planners have been working to develop new methods to clean water bodies across New York City, conducting research on “tunneling in urban areas,” a spokesperson for the DEP told local media. The agency also plans to construct overflow tunnels for its Newtown Creek and Flushing Bay projects. The construction of a tunnel for the Gowanus Canal could be done for “roughly the same cost as the tanks,” DEP says, which is currently estimated at $1.2 billion.

This October, the DEP presented revised designs for the Gowanus CSO Facility, which includes an eight-million-gallon CSO tank (with a second four-million-gallon CSO tank installed mid-canal), head house, and 1.6 acres of open space. The agency has recently completed the acquisition of a number of plots of land via eminent domain for the facility.

According to DEP, the benefits of a tunnel include:

The construction of the tunnel would entail the building of vertical shafts (approximately 60ft in diameter each), two at the northern end of the project (where the current CSO facility is planned) and one in the vicinity of the Salt Lot (2nd Avenue & 5th Street). After the shafts are created, a TBM will perform the majority of the work underground. The shafts would run approximately 150ft deep and connect to a tunnel measuring approximately 30ft (9.1m) in diameter that runs “below the footprint of the Canal.” The construction schedule for the tunnel is expected to be similar to that of the tanks.

EPA Regional Administrator Peter Lopez shared preliminary information about the proposed tunnel with members of the Gowanus Community Advisory Group (CAG) during a meeting on November 27. “We’re trying to understand the pros and cons of that, and ultimately the decision from the EPA will be ‘What does that mean for construction progression, timeframe, and – ultimately – tunnel versus tank? Is there an environmental benefit that may come from one or the other?’” Lopez said at the meeting.

If the EPA determines that the tunnel is the preferred approach, the design plans for the head house facility and public space will be reconfigured with public input, a DEP representative said.

“We have been evaluating information on the tunnel proposal that New York City has provided. No decision will be made without community input and a presentation to the Gowanus Canal Community Advisory Group,” EPA spokesperson Elías Rodríguez wrote in an email responding to local media requests for further comment from the agency.

“The city is under an order to design the tanks per the clean-up plan (Record of Decision),” Rodríguez continued. “Before we can make any decisions, EPA must first carefully weigh the benefits and potential consequences, including impacts on the implementation schedule, for the Superfund clean-up and effectiveness of solids capture. Once we have completed our evaluation, we will discuss this further with the Community Advisory Group.”

DEP will present the proposed tunnel option to the Gowanus Community Advisory Group at the group’s next meeting scheduled for January 22, 2019.

One of the US’ most contaminated water bodies

The Gowanus Canal is a 100ft (30m) wide, 1.8-mile (2.9km) long canal in the New York City borough of Brooklyn, which was built in the mid-1800s and empties into the New York Harbor. The canal was used as a major industrial transportation route. Manufactured gas plants (MGP), paper mills, tanneries and chemical plants operated along the Canal and discharged waste into it. In addition, contamination from sewer systems, storm drains and industrial pollutants also flow into the Canal.

As a result, the Gowanus Canal has been rated as one of the US’ most seriously contaminated water bodies. More than a dozen contaminants, including polycyclic aromatic hydrocarbons, polychlorinated biphenyls and heavy metals, including mercury, lead and copper, are found at high levels within the sediment.

In March 2010, the EPA placed the Gowanus Canal on its National Priorities List and, in December 2012, released a Proposed Plan to remedy the site under its Superfund program. The plan includes dredging the contaminated sediment that has accumulated as a result of industrial and sewer discharges and capping these areas. The EPA also recommended controls to prevent CSOs and other land-based sources of contamination from compromising the clean-up.

In June 2016, EPA finalized an agreement with the City that secured the design of two large CSO retention tanks. It also required New York City to undertake activities to prepare that location for the tank installation and to pay EPA’s oversight costs. The first phase of the tank design (site preparation and demolition) DEP was submitted in June 2017 and the design related to addressing support of excavation, excavation, deep foundation and associated elements of the tanks is currently due in April 2019.