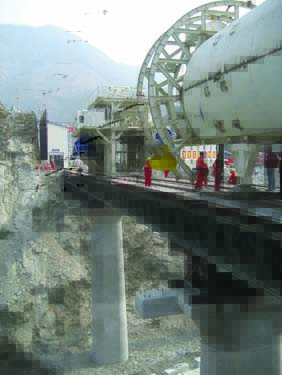 The two machines were assembled at a local workshop and transported to the jobsites, where they were assembled on bridges spanning a deep valley. The first machine, for the Left Line, was launched at the end of June and has excavated over 100m after being walked through a 2km long adit tunnel. The second machine, for the Right Line, was launched on July 17.  The TBM tunnels are just 40m apart and are located approximately 1,000m above sea level, about halfway up Qinling Mountain.

Ground in the tunnels consists of 30 to 80MPa UCS sandstone and phyllite rock beneath more than 1,400m of cover. The corresponding ground support program consists of continuous mesh and rock bolts, with either ring beams or steel straps, for the length of the tunnel. “We believe this systematic use of mesh with roof bolts and steel straps will be adequate support for the geology,” said Brian Khalighi, Robbins Vice President – Kent, WA, USA.

Should extremely poor ground be encountered, the mesh pockets can be relatively easily modified to use the McNally Support System, patented by C&M McNally Engineering of Toronto, Ontario, Canada for exclusive use with Robbins TBMs.  The McNally System utilizes steel or wood slats to provide continuous support along the roof area of the tunnel, protecting workers from falling rock. Other design aspects include improved ring beam building, separate roof and probe drills, and materials handling.

The parallel rail tunnels will be used for freight, and will link the city of Longnan with the towns of Waina, Luotang and Fengxiang within Gansu Province. The West Qinling tunnels are part of the Chinese Government’s Lanzhou to Chongqing Railway, a massive 820km long scheme that will link the capital of Gansu Province (Lanzhou) with southwestern Chongqing, a mega-city of over 35 million people.  The new railway, at a cost of US$11.3bn, will shorten transport times from 17.5 hours to 6.5 hours and enable an annual freight capacity of 100 million metric tons. Trains will run on the double track lines at 160km per hour, with a 50-train daily maximum. The entire railway is expected to open to traffic in 2014.