Infrastructure Ontario (IO) and Metrolinx have issued two Requests for Proposals (RFPs) for procurement packages for the Ontario Line subway project. Teams have been shortlisted and invited to bid on the Ontario Line Southern Civil, Stations and Tunnel (South) package and the Ontario Line Rolling Stock, Systems, Operations and Maintenance (RSSOM) package.

Teams were selected based on criteria identified in the Request for Qualifications (RFQ) process that began in June 2020. Criteria included design, construction, operations and maintenance experience and the financial capacity to deliver projects of this size and complexity.

The Southern Civil, Stations and Tunnels contract for the southern portion of the Ontario Line, from Exhibition/Ontario Place to the Don Yard portal (west of the Don River) includes:

Teams will begin preparing proposals that detail how they will deliver these projects. Upon evaluating the proposals received, IO and Metrolinx expect to award these contracts in 2022.

A fairness monitor will oversee the entire procurement process.

The entire 15.6km long Ontario Line is being delivered as three separate public-private partnership (P3) procurement contracts: RSSOM, South and North packages. The RFQ for the Northern Civil, Stations and Tunnel contract, the north portion of the Ontario Line from the proposed station at Gerrard Street and Carlaw Avenue to the Ontario Science Centre, is expected to be issued in 2022. In addition to the three main P3 contracts, there will also be a series of early works projects for bridge, track and other preparatory activities in select locations along the Ontario Line alignment, including the joint rail corridor where the Ontario Line will operate next to existing GO Transit rail services. These contracts will be procured through a traditional procurement approach.

The Ontario Line is one of four priority transit projects announced by the Province in 2019 for the Greater Toronto  Area. Procurements for the subway program are being staged to ensure each project is delivered successfully. Planning is underway for all four projects. 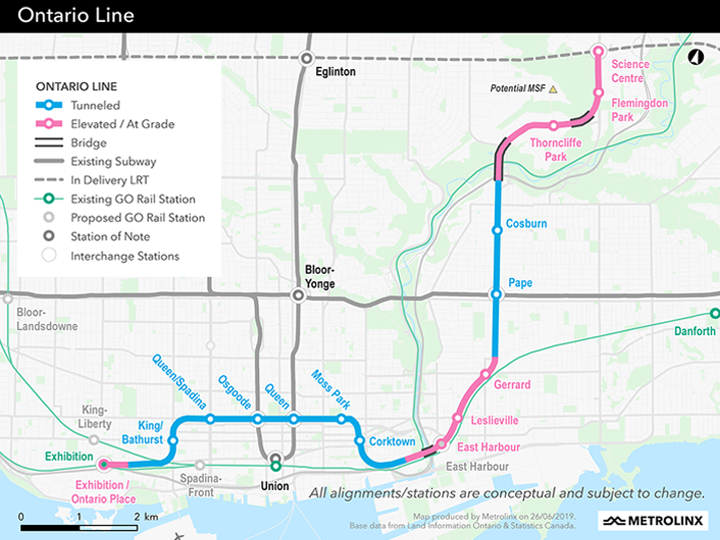