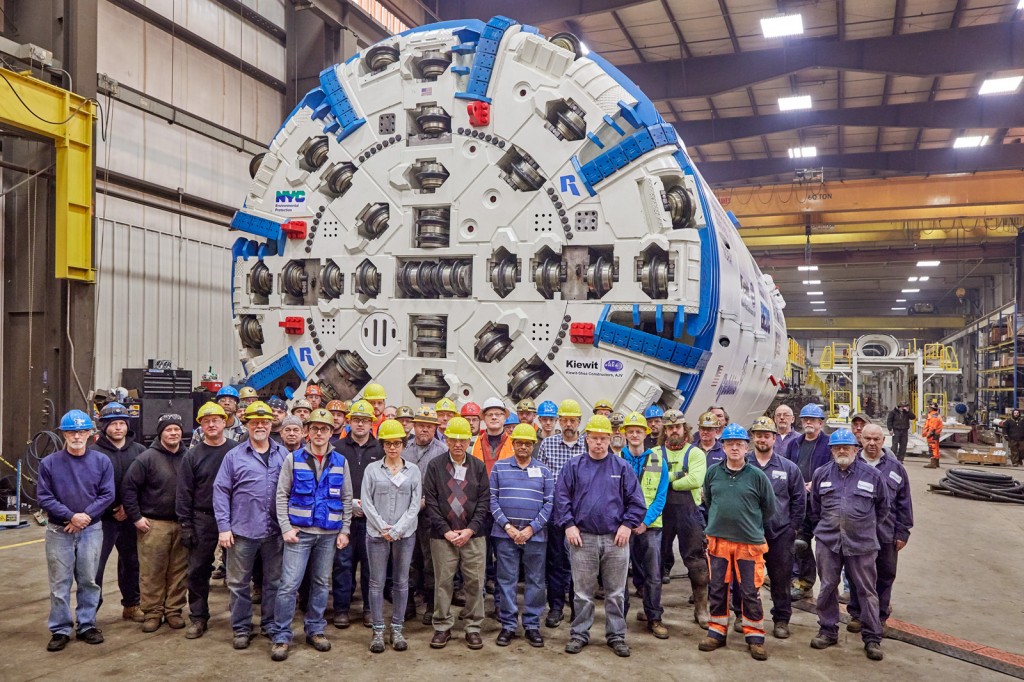 Robbins has completed the manufacture and testing of a unique 6.8m diameter TBM that will be used to repair the longest continuous tunnel in the world. The TBM will be used to overhaul a section of New York City’s Delaware Aqueduct, a 137km  long tunnel that delivers about 50 percent of the City’s drinking water each day.

Over the span of two days in February, representatives from the owner New York Department of Environmental Protection (NYDEP), consultant McMillen Jacobs (MJ), and JV contractor Kiewit-Shea Constructors (KSC) traveled to the Robbins facility in Solon, Ohio to witness the Factory Acceptance Testing of the custom TBM.

The Robbins Single Shield TBM will bore a tunnel to replace a 3.8km stretch of the Delaware Aqueduct.  The Delaware Aqueduct currently leaks about 75 million liters of water per day into the Hudson River. Investigations of the Delaware Aqueduct dating back more than a decade revealed cracks in the tunnel lining. While several inspections with an automated underwater vehicle showed that these cracks were stable, it was determined they could not be fixed from within the existing tunnel. New York City then decided that a new tunnel would be built under the river to bypass the leakage.

To build a bypass tunnel around the aqueduct’s leaking section, Robbins manufactured the 6.8 m diameter Single Shield TBM to safely seal against pressures up to 30 bar, and to operate in variable hard rock conditions. The Delaware Aqueduct was completed in 1944. During its original construction, work crews documented groundwater inflows of 7.5 to 15 million liters per day. Because this particular section of the tunnel lies 183m below the Hudson River, the inflows are under immense head pressure and thus require the unique tunneling technology.

Due to the challenges presented by the Aqueduct Repair, such as difficult geology and considerable water inflows, the TBM had to be designed accordingly. Difficult Ground Solutions (DGS) features, including powerful drilling, grouting, and water inflow control systems have been incorporated into the machine’s design to overcome the expected challenges. “One unique feature of this TBM is the closeable bulkhead, which allows the excavation chamber to be sealed off,” said KSC Tunnel Manager Niels Kofoed. “We expect this to be a key feature in the event that groundwater flows (shunt flows) from the excavated portion of the tunnel cause washout of the annulus grout. Once the bulkhead is closed the groundwater flows are stopped and secondary grouting of the precast liner can be performed, effectively cutting off the flow path of the shunt flows.”

Robbins Project Manager Martino Scialpi further noted that, “the TBM was designed with a 9,500 liter/min dewatering capacity. The machine is equipped with two drills in the shields for drilling through the head in 16 different positions and a third drill on the erector to drill through the shields in an additional 14 positions.  Drilling and pre-excavation grouting will be a routine job to control and minimize water inflows.” In addition, water-powered, high pressure down-the-hole-hammers will allow for drilling 60 to 100m ahead of the machine at pressures up to 20 bar if necessary.

In order to provide access to launch and retrieve tunneling equipment, two deep shafts were constructed in the towns of Newburgh and Wappinger, New York, where the bypass will begin and end. The project site itself poses challenges to the assembly and launch of the TBM because of the limited space available.

Robbins worked closely with KSC to ensure that TBM components were designed and sized so all could be lifted with the contractor’s hoist system and fit down the narrow, 270m deep shaft. Once assembled, the machine is expected to begin boring in autumn 2017.