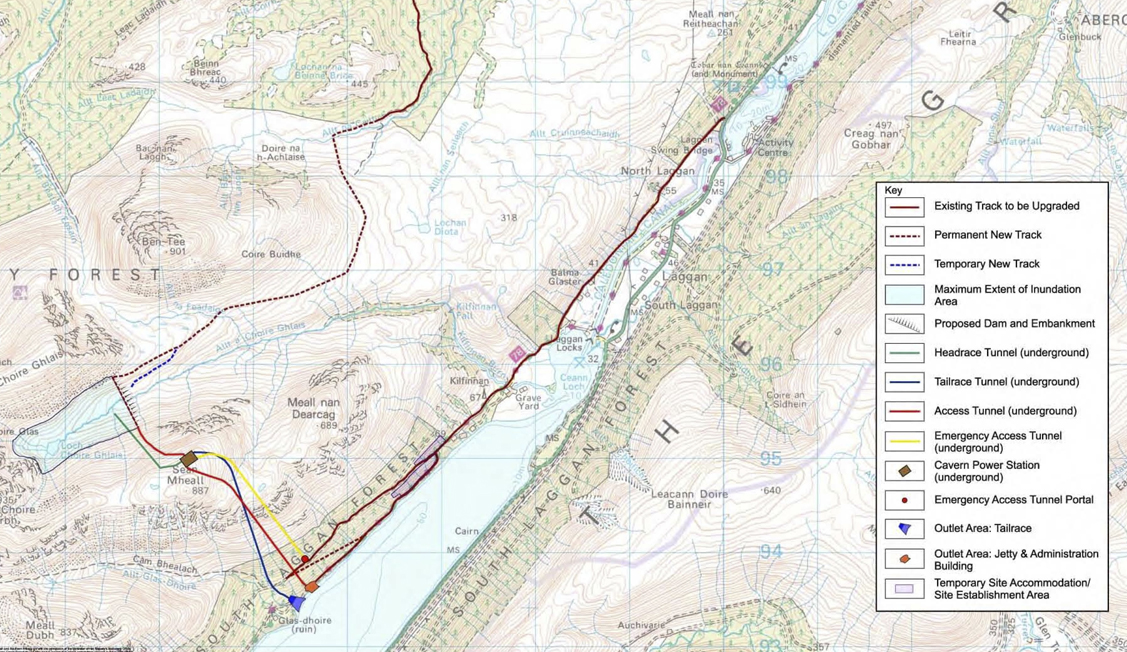 SSE Renewables, SSE’s renewable energy development division, has submitted an application to the Scottish Government for consent to construct a new US$1.3bn pumped storage hydro electric scheme to the north-west of Loch Lochy in the Great Glen. The scheme will include significant underground works and tunnel construction to excavate some 450,000 cubic meters of rock and would be the largest hydro project in Scotland and the first brand new pumped storage scheme to be developed in Great Britain since the Dinorwig scheme in Wales in 1974.

The scheme would require the construction of a new dam and upper reservoir at Loch a’ Choire Ghlais (the upper reservoir). At an estimated height above ground level of up to 92m, this would be one of the largest dams in the UK. A powerhouse complex would be constructed underground, together with a series of tunnels to provide access and convey water between the lower reservoir (Loch Lochy) and the upper reservoir.

In addition, an outlet area comprising an administration building and jetty, tunnel portals and a tailrace structure would be constructed on the shores of Loch Lochy.

Once completed the scheme would have minimal visual impact in the Great Glen.

It is envisaged that the construction period would last up to five years.

Jim Smith, Managing Director of SSE Renewables, said: “Hydro electric schemes, which use impounded water to generate electricity, are an excellent means of energy storage. Consequently, they naturally complement the variable output from the growing number of wind farms and play an important part in meeting peak demand.

As the UK’s leading generator of renewable energy SSE is proud to be at the forefront of developing renewables and helping tackle climate change.”

If the project receives consent, a final investment decision is unlikely to be taken before 2014 at the earliest, and progress of this scheme (and other similar developments) will be dependent upon a satisfactory public policy and regulatory framework, including a change in transmission charging regime.