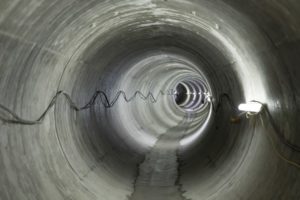 Working with specialist tunnelling firm Kern, the team used a system of four individual ‘shutters’ to cast the concrete in situ using a ‘hit and miss’ sequence allowing for faster production.

In March 2020, just a month into the secondary lining production, the team halted all work after the UK was placed under lockdown.

The 2.5m internal diameter of the FCT meant that social distancing was a huge challenge, but thanks to the efforts of this section of Tideway’s main works contractors, Bam Nuttall/Morgan Sindall/Balfour Beatty, along with the efforts of Kern, the team later resumed production in accordance with the latest guidance.

A tunnel boring machine called Charlotte had previously excavated the full FCT in two separate drives – first mining south from Dormay Street to King George’s Park, then (after a short journey by road back to Dormay Street) north to Carnwath Road.

Project Director Sally Cox said: “Well done to the entire team for completing the secondary lining of the Frogmore Tunnel. It has not been an easy one with the disruption of Covid in the middle of the works, but the team have worked brilliantly in making it a success.”

The team used a total of 1,420m3 of concrete for the secondary lining and were able to cast an average of 60m each week – with a peak production rate of 72m.

Attention now turns to cleaning both the northern and southern tunnels, completing the contact grouting and fixing any outstanding snagging items.

Work on the 25km, 7.2m diameter super sewer, which runs from Acton in west London to Stratford in east London, started in 2016.

The Tunnel has been divided into three sections – the 13km long Central, the East at 5.5km long, and the 7km West– with each section being constructed by a different joint venture of contractors.