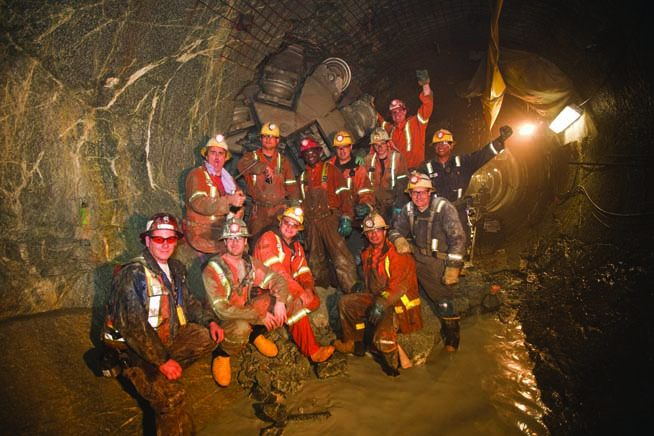 The two Main Beam TBMs completed excavation more than three months ahead of the revised schedule. The breakthroughs occurred after the restart of the machines, following an 18-month delay over a ground conditions dispute with the original contractor.

“We are quite pleased with the breakthrough. The success of this project can be attributed to having an excellent crew of knowledgeable people, good pre-planning of the work and very good TBMs,” said Frontier-Kemper Project Manager, Serge Moalli. Since SCP’s re-start of the two TBMs in July and August 2009, the machines have achieved rates of up to 29m per day.

The second Robbins TBM holed through at an angle into the other tunnel, where a chamber will now be built to conduct raise drilling of the 270m deep Capilano shaft.  Frontier-Kemper estimates that this work, combined with final shotcrete and steel lining in the tunnels, will take about two years.

The completion of the project will mark one of only several examples of TBM tunnelling in British Columbia. “I think we’ve proven here that you can tunnel through the hard granitic rock of British Columbia, even with all its quirks and stress releases.  We’ve shown that this is an effective alternative to drill and blast,” said Moalli.

Each of the two finished tunnels will be used to convey either raw or treated water between the Capilano Watershed and a new filtration plant. The Seymour-Capilano Water Filtration Project seeks to improve the quality of drinking water in Vancouver, BC, Canada. The completed filtration system will clean 1.8bn liters of water a day and will lower the water turbidity (cloudiness) and micro-organism levels to meet federal standards for drinking water.