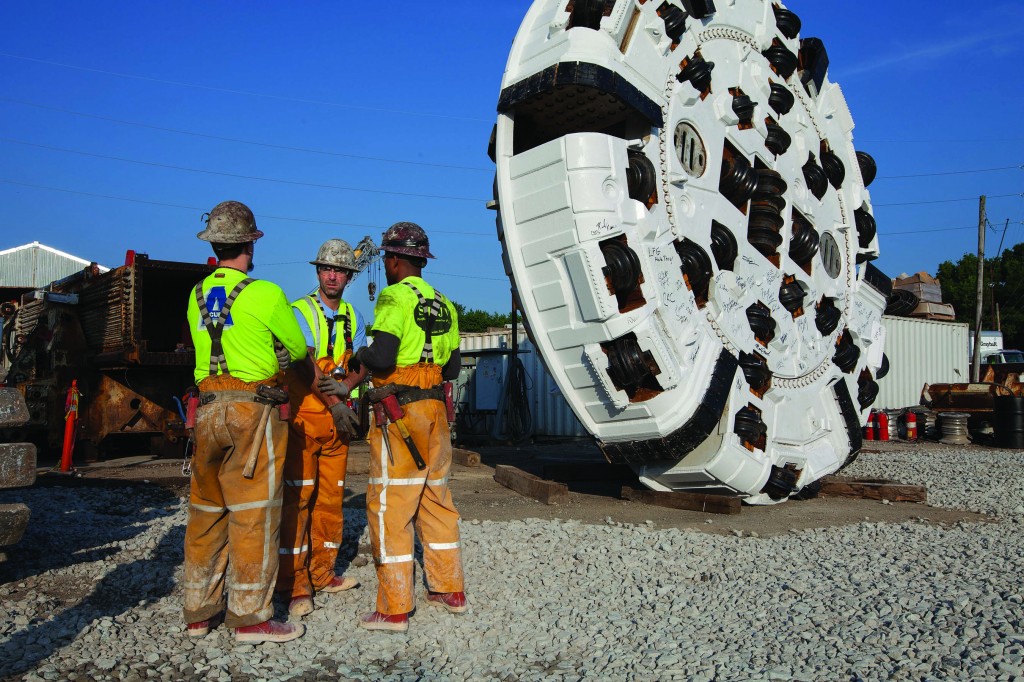 The Shea-Keiwit (S-H) JV has reported an impressive 300m progress since launching its 6.2m Robbins Main Beam hard rock TBM on 6th September on the 8.5km long White River Tunnel, the first in the next phase of the DigIndy wastewater tunnels below Indianapolis, Indiana, USA.

In addition to that work, the machine will bore the Lower Pogues Run, Fall Creek, and Pleasant Run Tunnels—a scope of work totaling some 28km through limestone and dolomite rock.

The machine was launched from the 67m deep White River shaft following a refurbishment that included new motors, gearboxes, electronics, and other elements. About one mile into the White River Tunnel, the drive will bifurcate eastwards to bore the 2.7km Lower Pogues Run Tunnel in front of Lucas Oil Stadium in downtown Indianapolis. The machine will then be backed up to the bifurcation point before continuing north for completion of the White River Tunnel.

As the machine bores, Robbins continuous conveyors remove muck in an extensive system that was highly successful at the DRTC.  Much of the conveyor structure remains the same for the new tunnels, with new horizontal and conveyor belting provided.  The conveyors will wind through curves as sharp as 300m in radius, as the tunnels follow the path of the White River overhead.

The S-K JV has until 2021 to complete the White River and Lower Pogues Run tunnels for local owner Citizens Energy Group, and until 2024 to complete all the tunnels.  The use of one TBM was seen as a positive: “The use of one machine was more efficient for our crews. The schedule allowed us to run with one TBM and we feel we can do it with one machine. It also was a less costly option than running two machines in terms of the owner funding the project,” said Dan Martz, vice president for J.F. Shea.

Once complete, the EPA-mandated deep tunnel project will reduce the amount of raw sewage overflows and clean up tributaries along the White River.

The machine is one of the longest-running built by Robbins. The rebuilt rock TBM was first used in Indianapolis on the 12.5km long main tunnel, called the Deep Rock Tunnel Connector (DRTC). On that tunnel, the machine achieved world records in its size class of 6 to 7m, including “Most Meters Mined in One Day” (124.9m); “Most Meters Mined in One Week” (515.1m); and “Most Meters Mined in One Month” (1,754m). “It’s nice to start the job with a machine that has already been proven and successful,” said Stuart Lipofsky, Project Manager for S-K JV.
However the DRTC was far from the TBM’s first job.  The machine, originally built in 1980, has been used on New York City’s Second Avenue Subway, as well as projects in Massachusetts and Canada.  Once the machine has completed the DigIndy network of tunnels, it will have bored more than 51km of tunnel—an achievement making it one of the hardest working Robbins TBMs ever put into service.  “The age of the machine wasn’t a concern for us, it was a positive. We knew it could perform in harder, abrasive rock,” said Lipofsky.