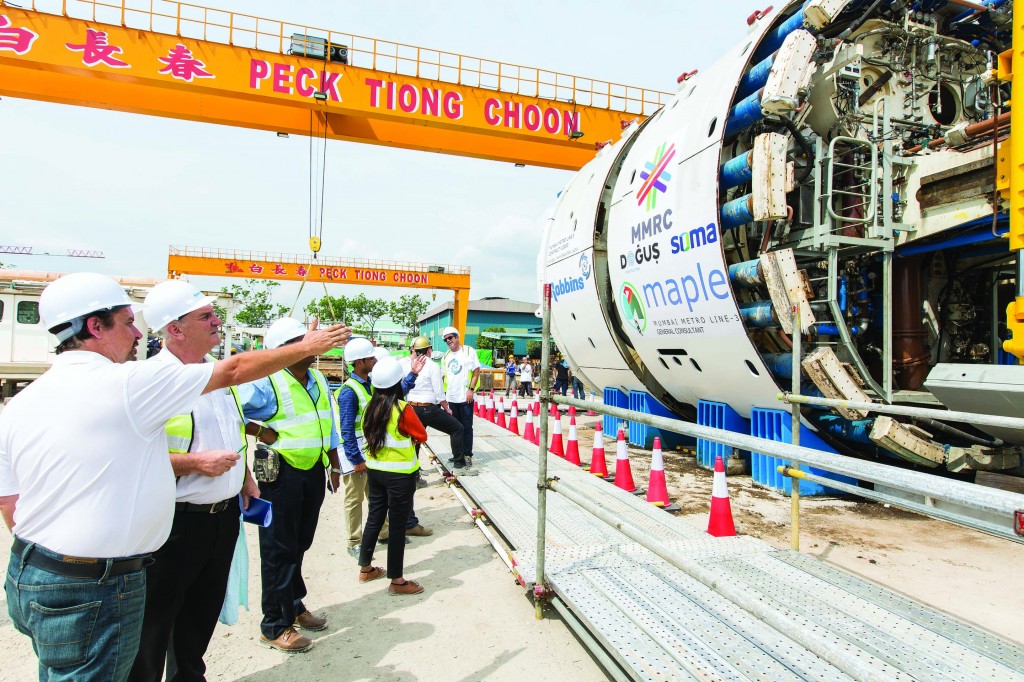 The first of two Slurry TBMs, a rebuilt 6.65m diameter machine, passed its factory acceptance on September 4, 2017 in Singapore. The machine, fitted with a Robbins cutterhead and outer shields, is destined for the Mumbai Metro Line 3 under contract UGC03 for the Dogus-Soma JV (DSJV), and will begin excavation in late 2017.  The factory acceptance for a second 6.65m diameter Slurry TBM will be conducted by the end of 2017.

The two machines will excavate parallel 3.5km long tunnels between Mumbai Central and Worli station sites, passing through three intermediate cut and cover stations on the way.  Ground conditions consist of fresh to weathered basalt and breccia up to 100MPa UCS with water pressures up to 3bar.

The JV selected Slurry machines for their contract due to the challenging ground conditions expected. “I have worked with Slurry TBMs on similar geology globally. Slurry TBMs have real power and will suit the hard rock geology of our Mumbai Metro contract 3. The water table and variable geology, especially basalt of higher hardness, can be easily tackled by Slurry TBMs,” said Mr. Tamay Sayin, Project Manager for DSJV.   The cutterheads of the machines are fitted with wear protection, wear detection bits, and Robbins 17-inch disc cutters for the conditions. Grizzly bars will limit the size of boulders that can enter the cutterhead to 250mm.  The slurry systems includes rock crushers as well as abrasion-resistant plating in high-wear areas.

The two TBMs are the first of a total of four machines being provided by Robbins for the Mumbai Metro Line 3. Another two 6.65m diameter Crossover XRE machines will bore parallel 2.8km tunnels on a separate contract in 2018. “Mumbai Metro is one of the most prestigious metro works in the country, and Robbins’ involvement in providing suitable machines and associated services is an honor,” said Kapil Bhati, Managing Director for Robbins India.

The 33.5km long Line 3 of Mumbai Metro being constructed by the Mumbai Metro Rail Corporation (MMRC) will consist of 26 underground stations and one at-grade station that will reduce heavy traffic and rail congestion between Bandra and Churchgate areas of the city. A total of 17 TBMs are being procured to bore various sections of the tunnels, which will be excavated at average depths of 15 to 25m below the city. The entire line is expected to be operational by 2021.