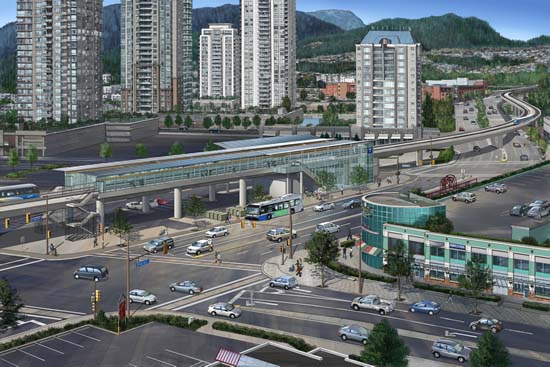 British Columbia’s Ministry of Transportation and Infrastructure announced yesterday, Thursday October 4th, that SNC-Lavalin has been selected as the preferred proponent for the design, build and finance of the Evergreen Line Rapid Transit project, in Vancouver, Canada.

The Request for Proposals (RFP) evaluation was undertaken by an evaluation team including leading experts in rapid transit systems design and construction, construction traffic management, finance, environment, engineering and other technical areas.

The project will fully integrate into the existing SkyTrain system, linking directly to the Millennium Line, with connections to the Expo Line, Canada Line, the West Coast Express and regional bus networks.

Construction cost for the Evergreen Line is estimated to be CA$1.4 billion. Funding is being provided by the government of British Columbia, the Government of Canada and TransLink.

Construction of the Evergreen Line will create 8,000 direct and indirect jobs.

Early construction works are well underway and are laying the groundwork for major construction. Major construction will begin in the late fall of this year, once the contract is signed. The Evergreen Line is on track to be open for service in the summer of 2016.