Tunnelling on Australia’s biggest public transport project, The Sydney Metro, is 50% complete after one of the project’s five Herrenknecht TBMs broke through into the new Crows Nest Station site. 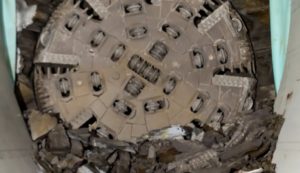 TBM Mabel’s cutterhead broke through a wall of rock at the new Crows Nest Station site after tunnelling about 3km from Chatswood.

Since launching in February this year, TBM Mabel has excavated about 290,000 tonnes of sandstone and shale.

Mabel will spend a few weeks undergoing maintenance before being re-launched at Crows Nest and tunnelling towards the next future Sydney Metro station at North Sydney.

TBM Mabel and partner machine, Wendy, are building 6.2km of twin tunnel which will link the recently opened North West Metro at Chatswood to the harbour’s edge at Blues Point. They are two of five Herrenknecht TBMs building the 15.5km, 6m i.d. twin railway tunnels between Chatswood and Marrickville. The TBMs are purpose built, with four double-shield, hard-rock TBMs designed to bore through Sydney’s hard sandstone, whilst a mixed-shield slurry TBM will excavate through the under-Sydney Harbour ground conditions.

Currently two TBMs will deliver the 6.2km from Chatswood to the edge of Sydney Harbour (Mabel and Wendy), whilst two will travel 8.1km from Marrickville to Barangaroo.

Kathleen will then build the second tunnel under Sydney Harbour after that, the whole TBM will be retrieved at Blues Point and taken away by barge. The machine is expected to tunnel through clay, silt and sediment under the harbour.