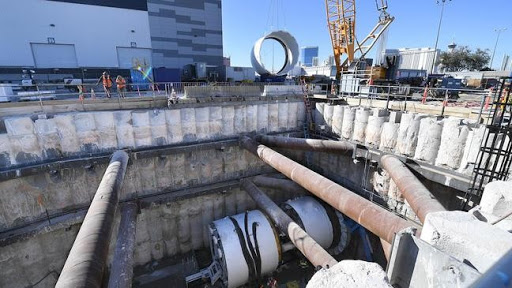 While Elon Musk’s The Boring Company (TBC) is expecting to achieve a breakthrough on the first of its two 4,300ft (1,310m) long tunnel drives for the Las Vegas Convention Center project later this week ­– company President, Steve Davis, has said he expects a deal for an underground transit system through the Las Vegas resort corridor to be “teed up,” should the project prove a success.

On January 9, Davis told a business group in Las Vegas that the company must first complete the Las Vegas Convention Center project on schedule by the end of the year. It also needs to deliver, he said, on the promise of using Teslas to move 4,400 people per hour within the company’s ‘Loop’ system.

Then, he said, tourism industry stakeholders will be ready to consummate ongoing talks about expanding the system from the airport to the Strip and into downtown. “We’re always in discussion with everyone who might be interested,” he told the Nevada chapter of the American Public Works Association. “…and if it goes well, everything’s teed up.”

Davis said the company looks at the convention center effort, “not as a one-time project, but the first of many, many projects. We’re actually very impatient and anxious to expand quickly. To be frank, our focus is here.”

The convention center job offers a highly visible test on which the company’s future hinges, Davis says. “We’re going to build the Loop at the convention center, and one of two things will happen. Either everyone will hate it, and we’ll go out of business – option two, everyone loves it and we expand.”

Davis said if TBC’s footprint grows in Las Vegas, he expects Southern Nevada to become a research hub for the company. “I have a feeling that at some point we end up here with some huge swath of land in the desert, testing boring machines. Down Las Vegas Boulevard is super obvious. North into the city of Las Vegas, into the airport,” he said.

Davis said Musk, who founded TBC in 2016, wants to bring to tunneling the efficiencies of standardization and technology he has applied to Tesla, the Gigafactory and SpaceX, where Davis was once an executive. He said TBC has a moonshot goal of being able to tunnel a mile a day, but “right now it’s like a mile every six weeks.”