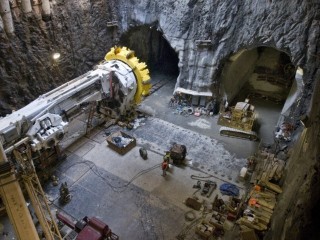 S3 Tunnel Constructors, a JV of Skanska USA Civil/J.F. Shea Constructors/Schiavone Construction, is due to start tunnelling next month on its US$337M, 2.4km twin tube section from 96th to 63rd streets on the US$3.8bn Phase 1 of New York’s 2nd Avenue Subway Project. The team is currently assembling the 7.2m diameter Robbins TBM in the 240m long x 25m wide cut and cover launch shaft between 96th and 92nd streets. The hard rock machine will start work in a southerly direction towards 63rd Street on the western tunnel in May.

“The arrival this week of the TBM at Second Avenue is a clear indicator that the MTA (Metropolitan Transportation Authority) is delivering on a major expansion project that will have a dramatic impact on Manhattan’s East Side easing overcrowding within our transit system and serving as an economic driver for the region as a whole,” president of MTA Capital Construction, Dr. Michael Horodniceanu, said in a statement.

The 450m long machine’s 200t cutterhead is dressed with 44 cutting discs to combat the hard rock conditions found along the alignment. The TBM is no stranger to the ground it will encounter. Built some 30 years ago, it was originally used to bore the 63rd Street Tunnel in the late ’70s, but was most recently used on the Fall River CSO Project in Fall River, before being completely overhauled and re-built in the Schiavone factory in Newark for the New York job.

The TBM launch box will eventually become the 96th Street station, whilst sections of the Second Avenue Subway tunnels built in the 70’s – before the project was abandoned due to financial woes – will be incorporated into this section of the line.

The project is far more financially stable this time though, with funding in place from Federal Transit Administration grants, New York state bond funding approved by voters, and the Metropolitan Transportation Authority’s capital budget. The 96th Street to 63rd Street section is due to be completed in late 2016.

All together the project, designed by DMJM Harris/FXFowle/Arup will be built in phases the tune of nearly 13km of twin tube tunnels, from East Harlem’s 125th Street to Wall Street.