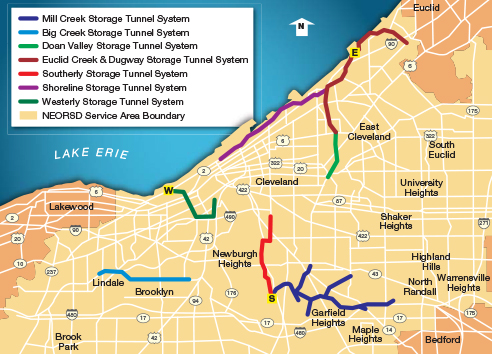 The Northeast Ohio Regional Sewer District (NEORSD) has selected a joint venture of Hatch Mott MacDonald (HMM) and MWH Global to design its Westerly Combined Sewer Overflow (CSO) Storage Tunnel and Dewatering Pump Station in Cleveland, Ohio.The Westerly Storage Tunnel is the latest project in NEORSD’s 25-year “Project Clean Lake” plan and will help to reduce combined sewer overflows (CSOs) in the region by providing 36 million gallons of storage. The tunnel will be built beneath the Ohio City neighborhood west of Downtown Cleveland, and will capture 98% of the annual combined sewage in the Westerly District.

With a total construction value of approximately $200 million, the project also includes the design of a new Tunnel Dewatering Pump Station to dewater the tunnel to the existing Westerly Wastewater Treatment Center on Lake Erie.

The HMM and MWH Global team designing the Westerly tunnel and pump station is the same JV that successfully designed NEORSD’s Dugway CSO Storage Tunnel (DST), which is currently under construction. Prior to that, HMM was also the design lead for the award-winning Euclid Creek Tunnel (ECT), which finished construction earlier this year.

The roughly two-year final design period for Westerly is slated to begin on October 17. Several horizontal alignments are currently under consideration of various lengths. The team’s aim is to select a horizontal alignment that reduces impacts to the thriving Ohio City neighborhood as much as practical while still providing the needed storage and keeping easements to a practical minimum.

The vertical alignment is also critical, as a shallow tunnel in poor soft ground (soft or loose fluvial river deposits) carries risk that would be dramatically reduced with a slightly deeper alignment in the competent Chagrin Shale bedrock formation. These early decisions, together with the location of the Pump Station and shafts, will be determined in the next six to nine months. Contractors can expect the tender documents to be available in late 2017.

The Westerly Tunnel is the 4th major CSO tunnel undertaken by NEORSD since 2004, including the recently completed ECT, the DST, and the Doan Valley Tunnel that is currently in design. A total of seven large-diameter tunnels will be needed to meet the agreed EPA level of control.

NEORSD is also pro-actively using Green Infrastructure measures to augment the tunnels for CSO control and provide future system resiliency. NEORSD COO Kellie Rotunno recently took part in an industry panel on “Green and Gray Infrastructure for CSO Control” at the Cutting Edge Conference, in Denver, Colorado, together with representatives from the City of Portland, Oregon, the Metropolitan Water Reclamation District of Greater Chicago and DC Water. Highlights of this discussion and follow-up dialogue will be published in an upcoming TJ article.