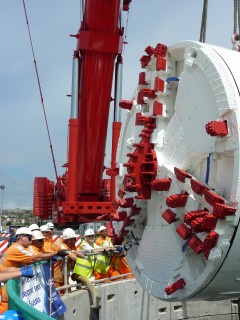 Southern Water’s US$448M, Brighton to Peacehaven sewer tunnel in the UK, has reached a significant milestone with the delivery of the first of two 2.4m diameter Lovat TBMs that will bore the majority of the 11km, eight to 40m deep tunnelled route. The second Lovat is due on site in mid July (Photo: Tris Thomas).

Responsible for the works is the 4Delivery Joint Venture, consisting of United Utilities/Costain/MWH, which will construct the 11km of tunnel mostly through chalk, erecting a six piece, reinforced concrete segmental lining as it progresses. Rates of between 10-40m/day are expected depending on ground conditions.

Although predominantly bored by TBM, there are three relatively short 1.8m diameter pipejack drives on the project. TBM tunnelling has been split into four drives, bored from two launch shafts. The machine that has just been delivered to site, Alice, will bore from the Ovingdean Launch shaft to the Marina Drive shaft, with breakthrough planned for September 2010. It will then be disassembled and returned to the Ovingdean launch shaft and re-launched that same month to Portobello. Breakthrough is scheduled for February 2011. The other Lovat will start boring next month from the Peacehaven shaft to Portobello with breakthrough expected in October 2010. It will be disassembled, transported back to Peacehaven and re-launched to Friars Bay in November 2010 with breakthrough expected in January 2011.

4Delivery began work on the project that includes two underground pumping stations and multiple shafts to enable connection to the existing system, in summer 2009. Project completion is due for 2013.