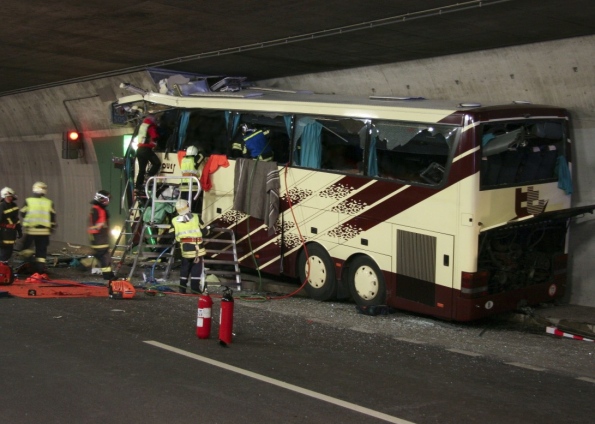 Twenty Eight people including 22 children have been tragically killed following a coach crash in a tunnel near Sierre, in Switzerland’s Canton of Valais. Reports from the site indicate the coach hit with the tunnel’s right hand wall before colliding head-on with the headwall of an emergency access niche. “The bus hit the barrier stones on the right side of the road. It then hit the tunnel wall front-on in an emergency stop space,” police said in a statement.

The coach had been carrying 52 people back to Belgium following a skiing trip in Val d’Anniviers in the Swiss Alps.

Currently there is no indication that driver fatigue was involved, although an investigation is now underway into the actual cause of the crash.

The BBC reports Belgian Foreign Minister Didier Reynders to have said: “It is incomprehensible. There were three buses and only one was in an accident, without any contact with another vehicle.”

Further reports from the site indicate driving conditions were normal and that the tunnel was not busy at the time of the crash. It has also been stated that the speed limit in the tunnel is 100km/h, or 62mph.