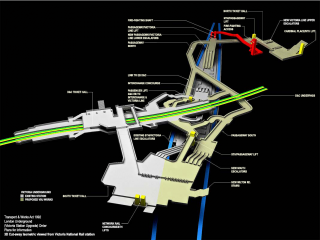 Transport for London has announced it intends to award the contract for the redevelopment of Victoria Underground Station to the Taylor Woodrow Construction/BAM Nuttall Limited JV.

In line with European procurement requirements, a minimum ten-day standstill period will apply before the award of contract can be confirmed.

Last October, TfL Board approved funding of around US$1bn for the Victoria Station Upgrade, which is part of TfL’s Investment Programme.

The station will be constructed in phases in order to deliver it in the most cost effective way.

The first phase is the construction of the new entrance and the new North Ticket Hall under Bressenden Place, which will start in 2011 and be completed in 2016, a year earlier than originally planned.

The remainder of the upgrade works including new lifts and escalators from the existing Victoria line ticket hall, which will be doubled in size, will be complete by 2018

Peter Lynch, Programme Manager, London Underground said: “Used by more than 80 million passengers each year, upgrading Victoria Underground station is a key part of improving the Tube network which will cut congestion and improve access for all our passengers using the station.

“The completion of the new North Ticket Hall is scheduled for 2016 when customers will be able to use the new entrance and benefit from improved access to the Victoria line services.

“The remainder of the station upgrade works such as the new escalators and lifts from an enlarged existing South Ticket Hall, will be complete in 2018.

“This will be a huge benefit to residents, commuters and tourists because it will cut congestion and customers won’t be held up by the station having to shut for several minutes in the rush hour because it is too full.”

Improved access and new lifts between the National Rail and Underground station.