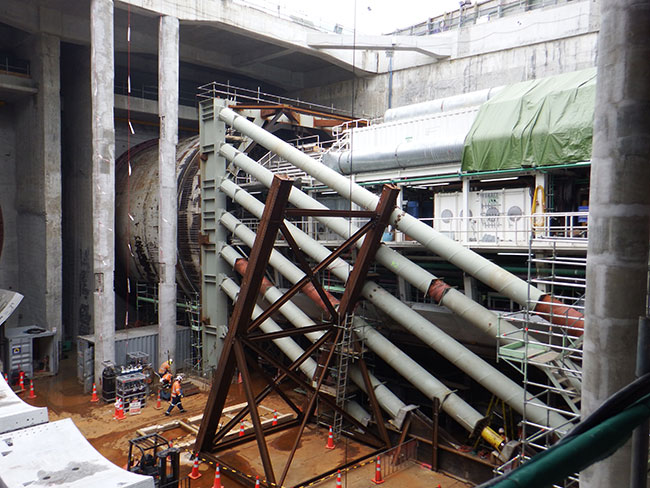 Waterview’s 14.46m diameter EPBM, Alice, has been re-launched by Fletcher Construction, McConnell Dowell and Obayashi – as part of the Well-Connected Alliance and is now making a careful start constructing the second of the 2.4km twin tunnels that will connect Auckland’s Southwestern and Northwestern motorways.

The TBM broke into daylight on the first drive on 29 September, having built the first of the tunnels as part of the NZ Transport Agency’s Waterview Connection project. Outstanding best performances of 126m per week and 452m per month were achieved using the Herrenknecht machine. The EPB Shield S-764 is one of the world’s largest machines of its kind. Its cutting wheel is driven by 24 electric motors with a total output of 8,400 kilowatts. It has relatively large openings for optimum removal of the excavated material and has been specifically designed for the expected geology. In the first section the TBM went through soils composed mainly of sandstone and siltstone. The cutting wheels’ cutting tools could be changed from the rear. The ripper tools for softer grounds were thus replaced with disc cutters for harder rock when needed.

In addition to the actual TBM with three back-ups, which creates the tunnel shell, Herrenknecht designed and delivered an autonomous, fourth back-up. This followed TBM Alice at a distance on the first section already. Its task is to lay a “tunnel within the tunnel”. It creates a part of the tunnel invert that supply lines will later pass through. This method of operation fully independent of the TBM advance offers an important advantage: advance performances of the TBM and the lining of the invert do not limit each other and can be done in parallel to save time..

The Transport Agency’s Highway Manager, Brett Gliddon, says the turnaround operation that followed was an extraordinary display of engineering innovation and skill.

“Many TBMs are launched, but only a handful are ever turned to do another underground run.

“What is really extraordinary about turning Alice is the sheer size of the machine and the very constrained space in which the manoeuvre has taken place, sometimes with just millimetres to spare” Mr Gliddon says.

After breaking through the ground at Waterview, the machine was pulled onto a massive steel cradle which was then slid sideways and turned to face south, the direction it will travel to build the second (northbound) tunnel.

The same process was then followed for the even larger support gantry that will follow Alice as she disappears underground over the next two weeks.

The second, temporary gantry will also accompany Alice underground to provide just enough support equipment for the TBM to tunnel the first 300m of the second tunnel.

Tunnelling will then stop while the temporary gantry is removed and Alice’s other two permanent trailing gantries are retrieved from the first tunnel, turned, and reattached.

Other services that support Alice will also be turned, including the conveyor system that removes excavated spoil.

Full tunnelling will resume in March, and Alice and her entourage are expected to complete the second tunnel and arrive at Owairaka next October.

Mr Gliddon says the turnaround and re-launch has capped off a year of huge progress to complete the Waterview Connection project. This has included completion of two of the four new ramps that will provide access between the Northwestern Motorway and the tunnels, building the foundations of the motorway in the completed tunnel and construction of the surface motorways either end of the tunnels.

“Next year will be just as big as work continues to complete all tunnelling and excavate the 16 cross passages that will connect the tunnels. We will also build the new community facilities, including skateparks and playgrounds, and begin fitting out the tunnels with the mechanical and electrical services they need to operate.”

A timelapse video showing the turnaround can be viewed at: https://www.youtube.com/watch?v=VA5q8qcXiCk&feature=youtu.be

The Waterview Connection is one of six related projects either finished or underway to complete the Western Ring Route – one of the Government’s seven Roads of National Significance.  The 47km long motorway will run between Manukau in the south, the upper end of the Waitemata Harbour, and Albany on the North Shore, and ease pressure on the SH1 motorway through the central city area. It will improve transport connections within Auckland, particularly with the international airport, and with the city’s regional neighbours in Northland and Waikato/Bay of Plenty.