Webuild has celebrated the baptism of its 9.87m diameter CREG EPBM “Mireille” that will begin boring a 5.3km long section of metro tunnel later this month for Line 16 in northern Paris, as part of the Grand Paris Express. 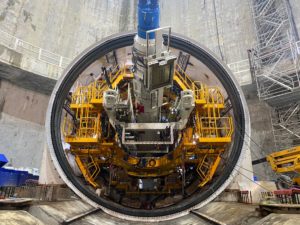 The TBM, the eighth to start working on the line, was named by students from nearby schools after Mireille Agletiner, a retired professor who is a city activist.

It will excavate between Bel-Air à Chelles and Mare au Chanvre à Sevran, crossing the municipalities of Montfermeil, Clichy-sous-Bois, Livry Gargan and Sevran.

Line 16 is the second line of the Grand Paris Express on which Webuild is working.

The first is a section of Line 14 South, where Webuild and its partner completed excavation with a TBM breakthrough at the site of the future Pont de Rungis station in southern Paris a few months ago. The section, Lot 4, runs for 4.05km. Line 14 South will improve connections and travel times between the Paris-Orly airport and the city centre.

The Grand Paris Express will extend the French capital’s metro and light rail network by 200km and 68 stations to improve connections between the centre and the periphery. It is set to improve the local economy, create jobs, promote sustainable mobility and reduce vehicle traffic and air pollution.