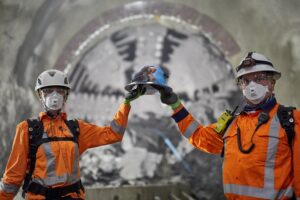 The TBM’s journey to Karanga a Hape from Maungawhau (Mt Eden) took three months and demonstrated the project’s continued advancement.

“Boring of the second tunnel only began at Maungawhau Station (Mt Eden) on 26 April and Dame Whina Cooper is slightly ahead of schedule by arriving at Karanga a Hape Station today,” says chief executive Dr Sean Sweeney. “Given everything that’s happened over the last two years, it’s particularly pleasing to see us meet our objectives on this section of the project.”

The completion date for the CRL project is currently set for late 2024. Over the past two years, the impacts of the pandemic have been substantial and are still impacting all construction projects. CRL is currently calculating the cost and time impacts and will share these as soon as possible.

Over the next two weeks, the tunnel-boring team will push the machine forward through the 230m Karanga a Hape Station (Karangahape) tunnel cavern to the Beresford Square site. Hundreds of workers have worked around the clock at Karanga a Hape Station since November 2019 to prepare for the breakthrough and to build what will be Aotearoa New Zealand’s deepest train station.

Once at Beresford Square, the TBM will undergo maintenance, including replacing the teeth of the cutterhead, before embarking on the next part of its journey travelling beneath Pitt and Vincent Streets through to Te Wai Horotiu Station (Aotea). Its breakthrough into the midtown station is expected this Spring.