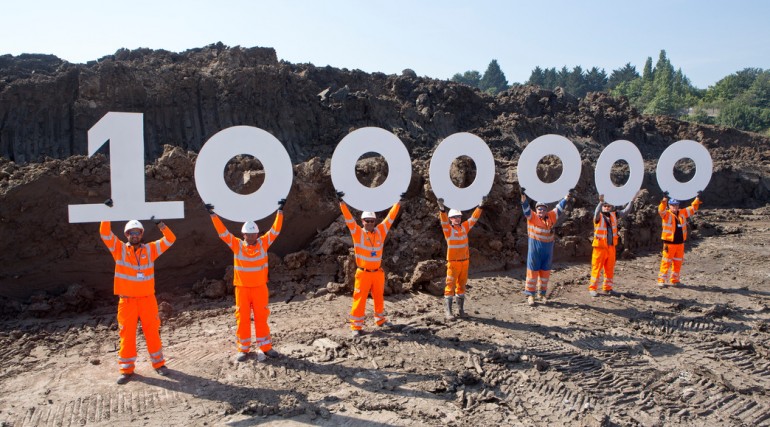 The one millionth tonne of earth to travel by rail has left Crossrail’s tunnel entrance in west London for Northfleet in Kent. The 55 million year old earth has come from the construction of Crossrail’s western tunnels between Royal Oak and Farringdon by two Herrenknecht EPBMs.

Over the past 15 months, more than 860 train loads of excavated material have been transported to Kent by GB Railfreight. The material is then transferred to ship and transported to a new nature reserve at Wallasea Island in Essex.

Andy Alder, Crossrail’s Western Tunnels Project Manager said: “One million tonnes of excavated material has now been transported from Crossrail’s western tunnels by rail removing thousands of lorry journeys from London’s busy streets. Crossrail will not only deliver a new railway for London and the South East but will leave the legacy of a new nature reserve that will be enjoyed for generations to come.”

Crossrail will excavate about six million tonnes of material during the construction of stations and its 21km of twin-bore tunnels. Close to 100 per cent of the excavated material is expected to be clean, uncontaminated and reusable elsewhere.

The RSPB wetland will guarantee a place for tens of thousands of migratory birds and combat the threats from climate change and coastal flooding.