A historic moment has been reached on the UK’s HS2, with the launch of the project’s Herrenknecht TBM, Florence, on the 16km long, 9.1m i.d. twin tunnels under the Chilterns. Florence is the first of HS2’s 10 TBMs that will bore over 100km of tunnels on Phase One of the UK’s new high-speed railway. A second machine ‘Cecilia’ will launch next month to excavate the second tunnel at the South Portal site. 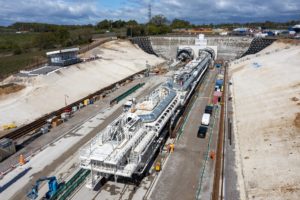 The launch is being launched from HS2’s South Portal site next to the M25 in Buckinghamshire, at an event attended by HS2 Minister Andrew Stephenson and HS2 Ltd CEO Mark Thurston among others.

Transport Secretary Grant Shapps said: “The launch today of the first giant tunnelling machine on HS2 is not only a landmark moment for the project, but the ground-breaking evidence that shows our commitment to levelling up transport links across the UK, supporting thousands of jobs and hundreds of apprenticeships in the process.

“The work has truly begun on taking HS2 northwards. The tunnels these machines dig will ensure the benefits of our new high-capacity, high-speed railway run to the great cities of the North and Midlands, forging stronger connections in our country, boosting connectivity and skills opportunities and transforming our transport links.”

Designed specifically for the mix of chalk and flints under the Chilterns, the two identical machines will bore the separate tunnels for north and southbound trains at 15m per day.

Each tunnel will require 56,000 fibre-reinforced segments – which will all be made on site.

Chalk excavated from the tunnels will be used for landscaping at the south portal site once construction is complete, creating wildlife-rich chalk grassland habitats across 127 hectares of the southern Chiltern hills.

Align Project Director, Daniel Altier, commented: “Align is very proud to be launching the first two TBMs on the HS2 project. The TBMs include a number of innovations to improve efficiency and the safety of the environment in which the crew will be working, that have never before been introduced on any previous TBMs, worldwide.

“I would like to thank everyone in our integrated project team that includes Align, our design partner Align D and HS2, working closely with our suppliers, for all their hard work that has enabled us to get to where we are today, culminating in the launch of Florence.”