A 2.7km (1.7 mile) long network of conveyors has begun operating in West London, and will move over five million tonnes of spoil excavated for the construction of HS2. The use of the conveyor will remove the need for one million lorry movements from roads in West London, reducing traffic congestion and emissions in the local area. 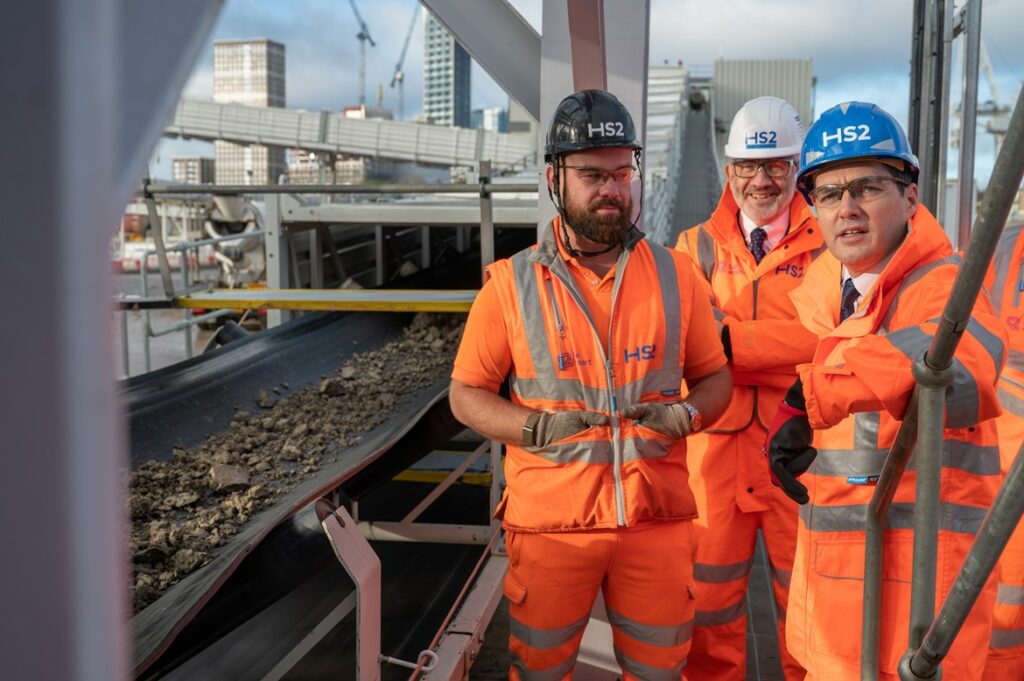 The conveyor network has three spurs, serving the Old Oak Common station site, the Victoria Road Crossover box site, and the Atlas Road site. At Old Oak Common, HS2 Ltd’s station contractor, BBVS JV will use the conveyor to remove the 1.5M tonnes of spoil that is being excavated for the station box, the subsurface structure in which the  HS2 platforms will be constructed.

The spur which serves Victoria Road Crossover Box site will be used by SCS JV and will transport spoil excavated for the crossover box. In addition, the spoil excavated in the construction of the Northolt Tunnel East when two TBMs are launched from the site in late 2023 will also be transported to the Logistics Hub via the conveyor.

From Old Oak Common, the conveyor runs at 2.1m per second, and the journey to the logistics hub takes 17.5 minutes. The conveyor system includes sound barriers and a cover to prevent noise and limit dust dispersal.

“The conveyor belt is a key example of how we are doing just that; collaborating with our partners to put in place new, innovative solutions which not only reduce our emissions, but also reduce disruption for the travelling public and local community.”

James Richardson, Managing Director of Skanska Costain STRABAG Joint Venture said: “SCS JV are proud to be part of the collaboration that constructed the carbon-friendly HS2 conveyor network, responsible for removing over 5M tonnes of spoil.

“Moving spoil on the vast 1.7mile conveyor network means a million fewer lorry journeys, less disruption to local residents and businesses, and puts us on track to deliver our commitment to achieving net zero carbon.”

From the Logistics hub, the spoil will be taken by rail to three destinations across the UK – Barrington in Cambridgeshire, Cliffe in Kent, and Rugby in Warwickshire – where it will put to beneficial reuse, filling voids which will then be used as a basis for redevelopment, such as house building projects.

To date, the Logistics Hub has processed over 430,000 tonnes of spoil, with over 300 trains distributing the spoil to its end destination.