On April 13, 2021, a key milestone was reached in the construction of the Dianzhong Water Diversion Project, the largest water diversion project currently under construction in China. TBM Yunling, the largest diameter gripper TBM in use on international water diversion projects, has successfully excavated 1,085.89m on the Xianglu Mountain tunnel, providing a solid foundation for an early breakthrough of the tunnel and furthering the prospect of early completion of the entire Project. 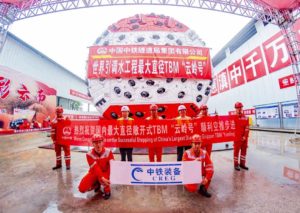 The project’s Dali Section I Lot 3 Xianglu Mountain tunnel, contracted by the China Railway Tunnel Group Co., Ltd. is 26.542km long and is excavated using a combination of drill+blast and gripper TBM, with the TBM driving a distance of 20.82km. The construction of the upstream section of the main tunnel encounters various challenges, such as a rapidly changing geology; a long-distance single direction heading with a continuously shallow depth; long-distance single direction heading ventilation issues; high ground stress, external water pressure and seismic intensity; and an active groundwater environment with faults.

The TBM has been developed independently by China Railway Engineering Equipment Group Co. Ltd. (CREG), and has an excavation diameter of 9.83m, a total length of 235m, a total weight of about 2,050 tons and a main drive power of 5600kW, specially designed to cope with complex geological conditions. The TBM has been equipped with a variety of special functions such as advanced geological prediction, harmful air monitoring and an emergency refuge chamber, all to try and solve potential geological difficulties during construction such as rockburst, large deformationss of soft rock, fault fracture zones, and muddy water in-rushes.

“This tunnel has a maximum buried depth of 1,450m and a maximum height difference of 494m. Muddy water gushing and large-deformation phenomena of soft rock may occur during the tunnelling process in the Xianglu Mountain tunnel. It passes through 13 large-scale fault zones. The excavation of the tunnel is like tunnelling in tofu, which means the geological conditions are very poor. Therefore, we have become increasingly more discriminating in regard to TBM performance,” said Song Wu, the site design representative of Xianglu Mountain tunnel and engineer from Changjiang Institute of Survey, Planning, Design and Research.

In order to overcome these difficulties, the owner and the contractor have repeatedly invited experts to improve the progress of the simultaneous construction of the drill and blast method and the full face TBM.

The Dianzhong Water Diversion Project in China, which started in October 2018, is the largest investment and the most difficult to build scheme of its kind under construction, and will span 6 autonomous prefectures (cities), Lijiang, Dali, Chuxiong, Kunming, Yuxi and Honghe, and involve 36 counties (districts), with a full length of 664km and a total estimated investment of 82.5 billion yuan. At present, the main works of the project have started, and the tunnel has been excavated for 187km.

It is expected that when complete in October 2026 it will effectively solve the problems of uneven distribution of water resources in Yunnan Province and regional drought in the middle of Yunnan Province, benefiting a population of 11.12 million along the route.

On April 13, 2021, a key milestone was reached in the construction of the Dianzhong Water Diversion Project, the largest...