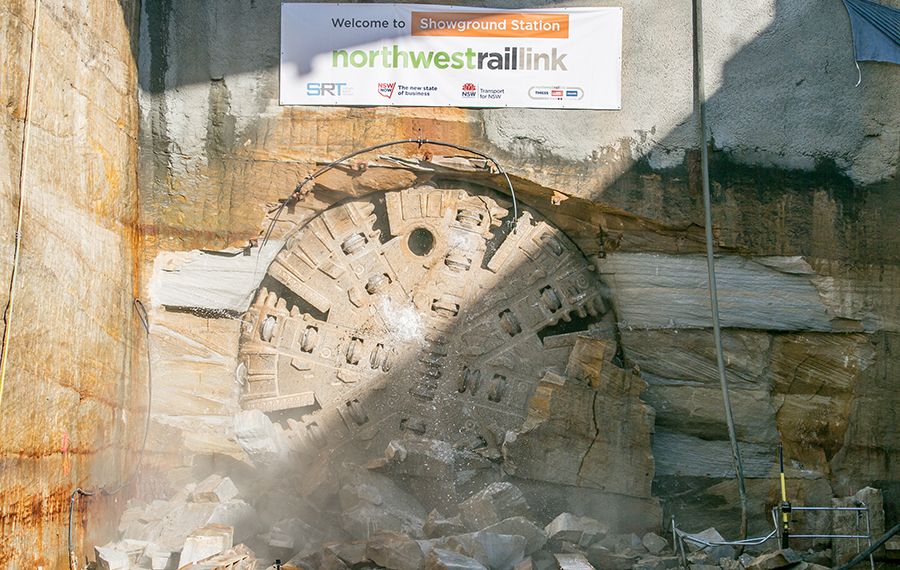 Tunnelling on Sydney’s North West Rail Link is more than a third complete following the breakthrough of Elizabeth, the first of the project’s four 6.99m diameter NFM Hard Rock TBMs, into the new Showground Station site.

The NSW Government also revealed the new cutting-edge design for Showground – one of eight new railway stations being delivered on the $8.3bn project. Showground station is being built underground with platforms about 20m beneath the surface, providing access to existing residential development, the Castle Hill Showground and nearby employment areas.

Elizabeth, started tunnelling in September last year, four months ahead of schedule, and is now halfway through its 9km journey from Bella Vista to Cherrybrook. Over the coming weeks, TBM Elizabeth will undergo maintenance as she is moved through the Showground station area, before setting off again towards Castle Hill station and then on to Cherrybrook where she will be pulled from the ground.

The four TBMs in the ground have so far built more than 12km of new tunnels, well over a third of the new 30km tunnelling task. The twin 15km tunnels from Bella Vista to Epping are Australia’s longest ever railway tunnels. More than 1 million tonnes of crushed rock has been excavated from the tunnels and recycled on commercial, residential and environmental projects elsewhere in Sydney.

The $1.15bn tunnelling contract was awarded to the Thiess John Holland Dragados joint venture on 24 June 2013.

The North West Rail Link is ahead of schedule with services to start in the first half of 2019, delivering a train every four minutes in the peak.