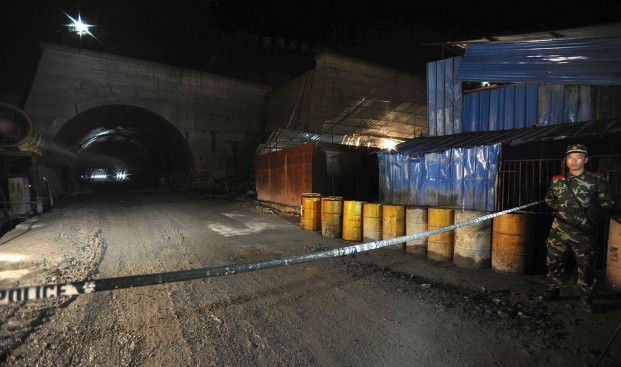 Preliminary investigations have confirmed that the truck suspected of causing a deadly blast in a highway tunnel under construction in Hunan, Central China, was in serious violation of safety regulations. The blast – which took place in the 2,355m long Baimianshan tunnel at 8.20am, last Saturday (May 19) – killed 20 of the 24 people working in the tunnel at the time.

Four workers were rescued, one is in a serious condition and another slightly injured. Two more escaped injury, according to provincial authorities. The injured are being treated in a nearby hospital.

The blast occurred as twelve 24kg cases of explosives were being unloaded from a truck inside the tunnel. Most of the workers in the tunnel were in close proximity to the truck at the time of the explosion.

Investigations found that the truck had also been carrying detonators, despite regulations stating that explosives and detonators must be transported separately, Fan Jinsheng, director of the State Administration of Work Safety’s emergency rescue center, told China Daily. How the detonator was ignited remains unknown, he said, adding that a team of experts is still analyzing the cause of the accident.

Immediately after the blast there were initial fears that the tunnel might collapse, but despite the danger rescuers went in and managed to pull one man to safety. Provincial departments, including police, fire, health, transport and work safety administrations, then arrived at the tunnel and coordinated search and rescue work and launched investigations, according to provincial authorities.

Hope of finding further survivors quickly faded and rescue teams have now all but left the site. “The blast from 240kg of explosives was so powerful that most of the bodies might have been vaporized in the explosion,” Fan said. “It is so tragic that the rescuers could not even find a disaster victim.”

According to Fan, the construction company responsible for building the tunnel is a subsidiary of China Railway Construction Corp.

Survivors said the project had several layers of sub-contracting and management was lax. The workers had to work overtime as contractors tried to keep ahead of schedule, Beijing Times reported on Tuesday. A sub-contractor fled immediately after he heard the explosion, the report said. He is still at large. All the dead were clients of Taikang Life Insurance Co and the company is expected to pay 4 million yuan, the report said.

After the accident, the Hunan government decided to halt all construction work at similar sites in the province to carry out thorough safety investigations, Fan said.