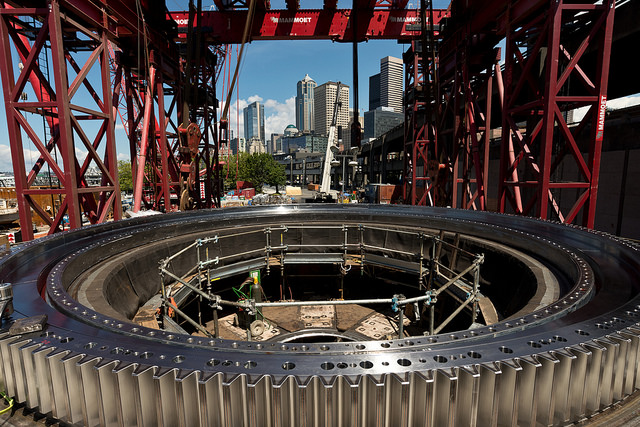 The SR 99 tunnel is now scheduled to open to drivers in spring 2018, according to a revised schedule STP has submitted to WSDOT. Machine repairs are scheduled to wrap up this fall. STP and manufacturer Hitachi Zosen will then perform an extended series of tests to ensure the machine is ready to complete the tunnel drive.

Tunneling is slated to resume in late November, with the machine emerging at the north end of downtown approximately one year later.

“The contractor’s schedule has changed, but the contract that governs their work remains the same,” said Todd Trepanier, WSDOT’s Alaskan Way Viaduct Replacement Program administrator. “The state is a paying customer in this transaction, and we’re intent on getting what we contracted for. We will continue to protect taxpayers and hold the contractor responsible for their work as they deliver this vital project.”

Since lifting the front end of the machine from the ground in March, STP has fully assessed the disassembled machine parts and made significant repairs and enhancements. In addition to beginning installation of the main bearing, STP crews have installed portions of the new seal system that will protect the bearing. Modifications include the addition of reinforcing steel, new monitoring systems and upgrades to the soil-conditioning system to prevent clogging.

See photos of the TBM repairs and enhancements

“Fully disassembling and assessing the machine was always the key to determining how long the repairs would take,” said Chris Dixon, STP’s Project Manager. “We want to reassemble the machine and resume tunneling as quickly as possible, but we also want to ensure the repairs are done right.”

STP and Hitachi are responsible for the repair effort, including the schedule. While the machine has been under repair, STP has continued work at the future tunnel portals, including construction of ramp and highway connections, and the buildings that will house tunnel operations.

STP crews halted tunneling in December 2013 after the machine overheated. Following an investigation, they discovered damage to the seal system and determined it needed to be replaced along with the main bearing. The cause of the damage has not been determined. Responsibility for costs associated with the delay will be determined through the process outlined in the tunnel contract.