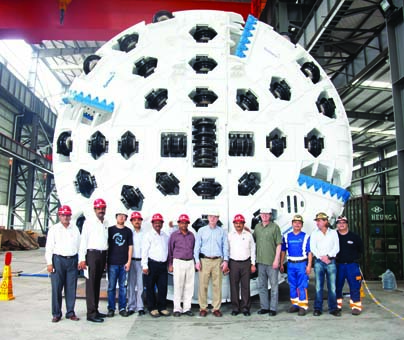 A Robbins 6.25m diameter Main Beam TBM began boring India’s 8.3km Mumbai Water Tunnel this June, and had bored over 320m as of July 4, 2012, reports the TBM manufacturer. Unity-IVRCL JV is the contractor for the basalt rock tunnel, which will alleviate Mumbai’s current leakage problems from its aging lines and provide inhabitants with a consistent flow of clean drinking water.

Due to the urban location of the tunnel, the TBM was launched from a 109m deep shaft, and its launching sequence included an initial start-up excavation of 50m with vital back-up decks connected to the TBM using cables. The first bore began March 30, 2012 and upon completion, the decks were lowered and a continuous conveyor system was installed for muck haulage and storage.

Onsite First Time Assembly (OFTA) was used to assemble the main bearing, lube system, back-up decks and horizontal, vertical and stacker conveyors.  OFTA saved the contractor both time and money by assembling the parts at the jobsite and eliminating pre-assembly at the manufacturing facility in Shanghai, China. The OFTA process took place at the shaft bottom in a 100m long starter chamber and a 50m tail tunnel. TBM components were lowered into the shaft using mobile and gantry cranes.

Following the initial excavation, V.D. Sharma, Director of Operations at Unity Infrastructure said: “Robbins has made an outstanding effort during the excavation, without many difficulties, which speaks to their knowledge and team spirit.” Although the lack of conveyors during the initial bore was challenging, current advance rates are averaging 3.5m per hour.

Difficult ground conditions are expected during excavation, including hard basalt rock, fractured ground and possible water inflows. In preparation, the TBM has been equipped with 19” cutters and a probe drill. Rock support has been applied during the initial stretch of tunnel.

Once completed, the Mumbai Water Supply Tunnel will run between the Kapurbawdi and Bhandup areas. The tunnel will provide the city’s approximately 20.5M residents with a reliable water supply, even during the seasonal monsoons that regularly contaminate Mumbai’s water resources.