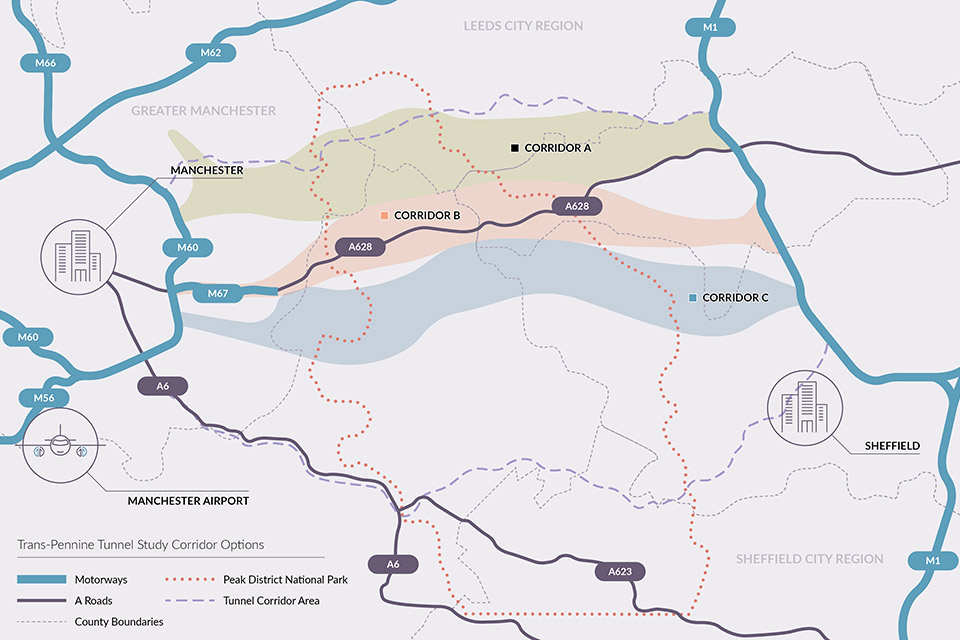 Five routes have been shortlisted for the UK’s Trans-Pennine tunnel – at up to almost 30km long the most ambitious road scheme undertaken in the UK in more than 5 decades.

The Trans-Pennine tunnel study was launched by the government in autumn 2015, one of a number of studies aimed at addressing some of the biggest challenges facing the road network in the UK. Today’s study shows the continued strong case for the tunnel, which could provide safer, faster and more reliable journeys for motorists.

The tunnel between Manchester and Sheffield could be a national first and almost halve journey times between the 2 cities.

All 5 routes join the M60 east of Manchester to the M1 north of Sheffield, with 4 options starting at the M67, and will see journeys cut by 30 minutes.

The tunnel could provide an economic boost to the 2 cities as well as the surrounding area. The link would help protect the environment by reducing traffic through the Peak District National Park, as well as support the government’s plan to build a Northern Powerhouse.

Transport Minister John Hayes said, “I want people in the north of England to benefit from quicker, more reliable journeys.

Today’s study brings us a step closer to building a Trans-Pennine roads tunnel – it would be the most ambitious project since the construction of the first motorways 50 years ago.

We are already spending £15 billion on the biggest upgrade to the road network for generations.

This next phase is aimed at creating more vital links, creating jobs and opportunities and helping hardworking families across the country feel the benefits of our investment.”

John Cridland, Chairman of Transport for the North, added, “The study shows a tunnel beneath the Pennines would both boost the economy of the region, and potentially benefit the environment of the Peak District by reducing traffic in the national park.

This is just one of the visionary projects Transport for the North is working on, as well as other schemes, such as Northern Powerhouse Rail, as we continue to develop a Transport & Investment Strategy to connect the North and transform its economy.”

The study is part of the government’s next phase of road improvements, which will get underway from 2020. The current Road Investment Strategy period covers 2015 to 2020.

In the final stage of the study, due to be completed by the end of 2016, the strategic and economic cases for each option will be assessed and cost estimates will be provided.

Two further reports – the A1 east of England and the Cambridge to Oxford expressway – are also published today. Studies into the M25 south west quadrant, the Manchester north west quadrant and the Northern Trans-Pennine are also underway.

Final reports of all 6 will be completed in the next 6 months and will inform the development of the government’s second Road Investment Strategy.