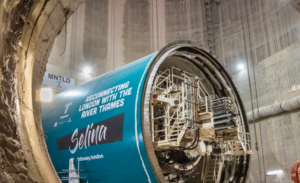 The Eastern section is being constructed by the JV Costain Ltd., Vinci Construction Grands Projets and Bachy Soletanche which launched Selina earlier this year and has since created over 2.75km of the 5.5km stretch of tunnel, digging beneath landmarks including Brunel’s 19th century Thames Tunnel near Wapping and King Edward Memorial Park.

The TBM has now reached Limehouse and will travel inland for the remaining 2.75km of her drive towards the already-built Lee Tunnel, which links Abbey Mills Pumping Station to Beckon Sewage Treatment Works.

Selina was the last machine on the project to get underway, having arrived in the capital in 2020 following a delivery by water from Germany via Rotterdam and up the River Thames to her starting point at Chambers Wharf.

Jim Avant, Delivery Manager for the Eastern section of the tunnel, said: “This marks an exciting milestone for the project, and has involved a great deal of hard work from the team. As Selina embarks on the second half of her journey, we are focused on continuing tunnelling safely and getting closer to delivering a cleaner River Thames for London”.

Almost 24km of the new tunnelling system has been excavated under London. Once the tunnelling phase is complete, the vital testing and commissioning period will begin before the super sewer goes into operation in 2025.